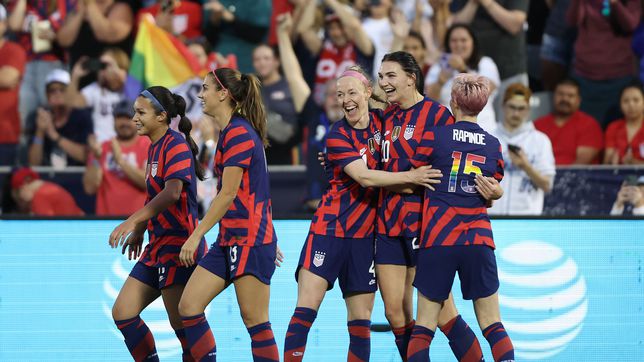 With getting tickets for the eighth final by United States National Team Feather qatar world cup 2022, The Greg Berhalter-directed FIFA won’t be the only beneficiary in the economic aspect, as those led by Megan Rapinoe will receive a significant amount, following an equal pay agreement between US Soccer and the women’s national team.,

USWNT will be able to get $6.5 million due to the fact that USMNT They entered the next stage of the World Cup held in Arab lands and are credited with a total of $13M dollars to reach this point in the World Cup., The money will be split and can be increased if the ‘Stars and Stripes’ team eliminates the Netherlands.

The surprising thing in this situation is that the four-time world champion (1991, 1999, 2015 and 2019) It won only $6M in combined prize money behind the two most recent titles, Canada and France. Bearing in mind that football’s supreme governing body awarded only $30 million to women’s teams in the World Cup 3 years ago and in Qatar $440 million will be distributed among all teams.,

Above, with information from Front Office Sports. Last September, when the equal pay agreement was signed, USWNT captain Becky Sauerbrunn said: “I want to thank everyone for the support, for the messages on social media, for the ‘equal pay’ chants. You do make a difference and you truly are the best fans in the world.”,

What would the pay rise be if the United States beats the Netherlands?

In the scenario that the Americans eliminate the Dutch in the round of 16 and qualify for the quarterfinals, Instead of receiving a total of $13M, they would receive $17M, which would give $8.5 to each squad when split between the USWNT and USMNT., If it is given, As long as Berhalter survives the World Cup, the prize increases substantially.,