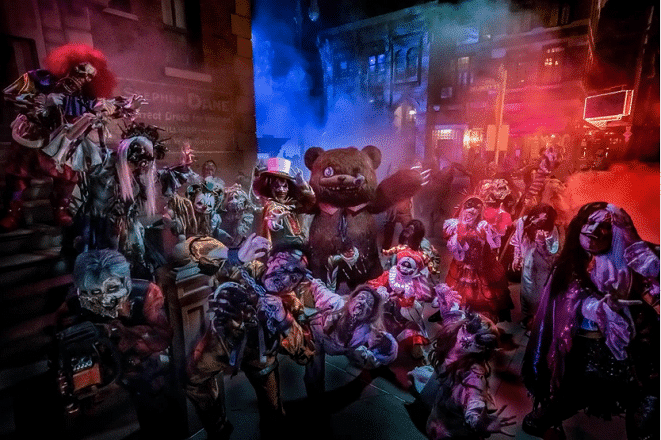 In many places in Japan, precautionary measures are being reduced due to the corona virus. People are looking forward to returning to normal everyday life. At the same time, events like Halloween are again coming into focus. As a result, places like Universal Studios Japan are slowly starting to reinvent themselves. The amusement park announced that there will be another Halloween Horror Night in the fall.

The very popular horror event hasn’t happened since 2019, but visitors still remember the event, which lasted more than a night. This year, Halloween Horror Night aims to encourage anticipation of the actual Halloween evening and will therefore take place through September 8th. The last scary night should be on November 6.

During the event, street zombies would return, among others, after sunset and terrifying passersby populating the New York area of ​​the park. Universal Studios Japan wants to capture the past few years and this year promises more different zombies on the streets than ever before. The overall theme for this year is a zombie circus. The aim is to combine some visitors’ fear of zombies with the scary clowns to increase the chill factor.

Universal Studios Japan regularly brings in creative partners for such large events. This year the company is increasingly working with game developers like Capcom. Capcom is one of the creators of the internationally successful “Resident Evil” universe, which is reflected in the Halloween event. After all, zombies hunting people also play an important role there.

A survival horror maze is planned under the label “Resident Evil the Extreme Plus” (or “Biohazard the Extreme Plus”, as the game is called in Japan). This is an enhanced and expanded version of the 2019 charm. Inspired by the game Resident Evil 2, visitors and a fellow Raccoon enter the City Police Department building where they interact with zombies and encounter other creatures. It’s not just about getting out of the maze, participants have to complete various missions to earn a rank which can also be earned in the game.

Horror celebrities honor themselves on Halloween

In addition, Universal Monsters-Legend of Fear-Labyrinth was opened at Universal Studios Japan, which previously thrilled horror fans at Universal Studios Orlando in Florida. The setting here is a dark graveyard surrounded by famous horror characters such as Dracula, Frankenstein or the werewolf. Visitors must cross the maze while being chased by monsters.

If you want to dance with zombies instead of being chased by them, you can do so at the Zombie Day Dance Show. During the duration of the event, all visitors are still asked to wear masks. Not only to counteract the spread of the corona virus, but also to give a little boost to the scary atmosphere in the park.