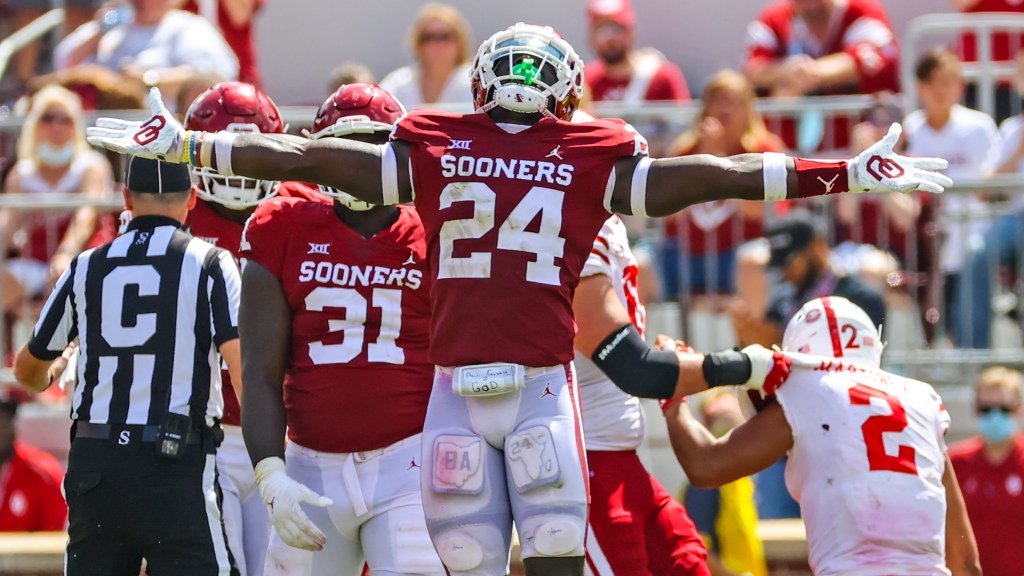 The Unpacking Future Packers Countdown is a countdown of 100 prospects that could be selected by the Green Bay Packers in the 2022 NFL Draft.

The 2022 NFL Draft is loaded with athletic linebackers that will test will this week at the NFL Scouting Combine.

Utah’s Devin Lloyd is a Top 10 player in this draft. Georgia has three linebackers (Nakobe Dean, Channing Tindall, and Quay Walker) that will all get selected in the Top 100. All three of those linebackers figure to put up eye-popping numbers.

Christian Harris, Brandon Smith, Chad Muma, Leo Chanel, Damone Clark, and Troy Andersen are all athletic freaks that will put on a show.

Brian Asamoah might be the quickest linebacker of the bunch. For that reason the Oklahoma linebacker checks in at No. 55 in the Unpacking Future Packers Countdown.

“He is an athletic freak,” Chris Plank, the Sooner sideline reporter, said. “He is going to drop some jaws with what he runs at the combine.”

Asamoah arrived in Norman as a three-star recruit from Ohio. During his first year as a starter in 2020, Asamoah recorded 66 tackles, 5.5 tackles for loss, two sacks, one interception, and four pass deflections.

This past season, Asamoah led the Sooners in tackles (90) and recorded four tackles for loss and one sack.

“I think the biggest thing we saw this past season from Asamoah was his ascendance into a defensive leadership role,” Josh Helmer, a contributor for Sooners Wire, said. “He was unquestionably one of the most important players on OU’s defense. For the second straight season, Asamoah finished as Oklahoma’s leading tackler.”

Asamoah plays at a different speed. He covers a lot of real estate. He’s a run-and-chase linebacker. The two-year starter is a twitched-up athlete and has great short-area burst.

This is range for days from Brian Asamoah II. pic.twitter.com/4inqXtpf0R

“He can cover the whole field,” Plank said. “Go back and look at some of the plays. You know what I would say when people are like, ‘Hey, so explain Brian Asamoah’s game to me.’ I would put the Baylor film on. I’d say watch the Baylor game. He was the best player on the field for Oklahoma against Baylor by far. He was everywhere. He was making every single play. He seemed like he was coming downhill the whole game.”

The Oklahoma linebacker is a physical and aggressive tone-setter. He has a quick trigger and comes downhill like he was shot out of a cannon. Asamoah delivers a heavy blow at contact and shots gaps to disrupt plays in the backfield. He may be undersized (6-0, 220 pounds), but he has the traits to be a difference-maker against the run.

Brian Asamoah (#24) comes downhill like he was shot out of a cannon.

The Oklahoma LB is likely going to be one of the top testers at the position this week. The former HS RB covers a lot of real estate with his speed. pic.twitter.com/vBcCoKvk7h

From Mike Renner of PFF:

His range is as good as it gets at the position, and he plays a physical brand of football despite being just a shade over 220 pounds. Asamoah is the kind of smooth mover who should shine in coverage one-on-ones.

Asamoah is a fluid athlete. He moves like a defensive back in space. He’s able to flip his hips and run with running backs and tight ends in coverage.

“He can cover,” Plank said. “With the usage of tight ends growing in the NFL, that’s huge.”

With his blend of physicality and quickness, Asamoah has the traits to be a special teams demon at the next level.

“Asamoah got his start with Oklahoma on special teams,” Helmer said. “With his sure-tackling in space, he’s a natural fit to slot in on special teams coverage units straight away.”

Asamoah finished this past season on a terror. In the last three games, the Oklahoma linebacker recorded 35 tackles, four tackles for loss, one sack, and forced two fumbles.

He continued to build off that strong finish at the Senior Bowl, where he was named the top linebacker on the National team, according to Renner of the PFF:

Asamoah was easily the most athletic linebacker on the field throughout the week. He played tight coverage during one-on-ones and showed the kind of range you’d expect from a former safety. Coming into the week, he was supposed to struggle to take on blocks against the run, but he showed multiple ways to defeat blockers throughout the week.

Asamoah knows one speed. He plays like his hair is on fire. His speed is his greatest strength, but it can also get him into trouble with overpursuing (bad angles), not coming to balance as a tackler, and some false steps. Once he harnesses that speed and aggression, as he started to in 2021, he’ll develop into a gamechanger.

Fit with the Packers

The Green Bay Packers could be in the market for a starting inside linebacker if they’re unable to re-sign All-Pro linebacker, De’Vondere Campbell.

Even if Campbell is re-signed, they could still stand to upgrade the depth behind him.

The speed that Asamoah possesses can’t be coached. The Oklahoma linebacker can impact the run game while providing a four-down skillset with his ability in coverage and ability to provide an impact on special teams.