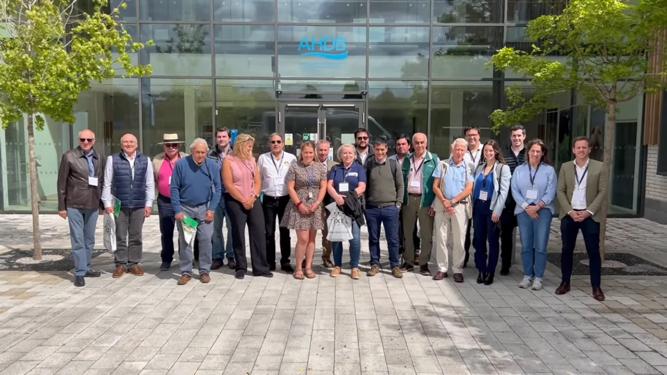 For a few days, three producers from Uruguay and a representative of the industry have participated in a tour of England which is also attended by several producers from other South American countries.

Lucas La Cava and Norberto Paiva, breeders from Texel, Gabriel García Pintos of Hampshire Downs and Rodrigo Santos representing Frigorifico San Jacinto, joined the initiative organized by the United Kingdom Embassy, ​​aimed at commercially bringing producers from both regions together. should bring. After working for more than two years, seeking the sanitary opening of new markets in Latin America for English sheep genetics, today we are working commercially with producers from Argentina, Brazil, Paraguay, Chile, Colombia and are finally seeking Uruguayan approval. officials to reach that market.

Lucas La Cava said that the mission which is already coming to an end, allowed the entire sheep industry to be known for the first time in the United Kingdom from the breeding, production, research, marketing and events arising from the item. He said it was remarkable how “extremely sheepish” the United Kingdom turned out to be, where “sheep is seen everywhere.”

Read Also:  Philip of Edinburgh's will to be secret for next 90 years

La Cava explained that leaving behind the first week in London, the second phase involves a visit to three Texel establishments in the Scottish capital Edinburgh, carrying out all the procedures to enable the genetic resistance of the scrapie, which gives them genetics. Allows exporting. To everyone

In the context of the reality seen on the other side of the world, La Cava said that sheep farms normally have an average of two hundred female ewes, where the producer lives on the farm and does not have a permanent workforce, but is instead employed. is kept. seasonal form. Similarly, he noted that the establishments have very good pasture and work infrastructure, which allows them to achieve very good profitability both for the sale of lambs as well as genetics.

As for numbers, the president of the Texel breed in our country said that the United Kingdom has a stock of 35 million sheep, of which 25 million are maternal sheep and about 30% of these mothers are born with the Texel, a breed that This year is celebrating the 48th anniversary of its presence in that region.

Canada’s two busiest fire halls are both in BC

Mali interim leader says he is ‘fine’ after assassination attempt