US boosts Asia diplomacy to address growing competition with China 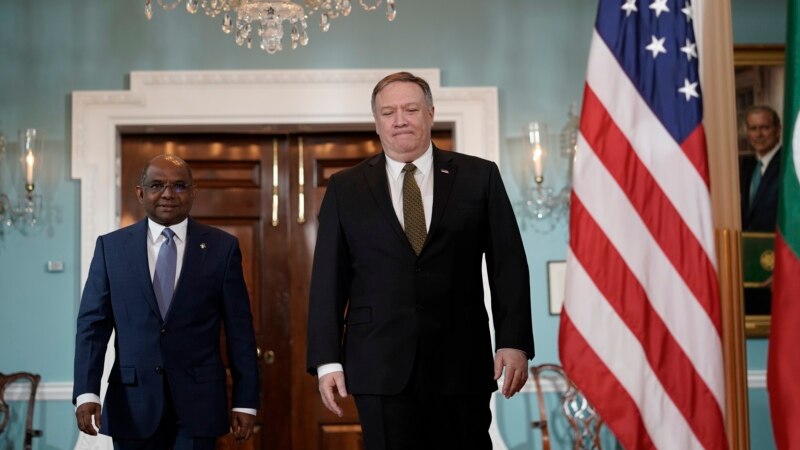 A senior US official says the State Department is “on the right track” to open its first embassy in the Maldives “very quickly” in a time of increasing geopolitical competition with China.

More than a year and a half after the embassy’s first announcement, US President Joe Biden is expected to nominate the first US ambassador to the Maldives soon.

“I believe we will notify Congress of opening a (diplomatic) presence soon,” Donald Lu, Assistant Secretary of State for South and Central Asian Affairs, told US lawmakers during a House Foreign Affairs subcommittee hearing on Wednesday. , “We are on the right track. I think we have got the support of a friendly government.”

“It is such an important place in the world, a small chain of 180 islands, but it is adjacent to a waterway through which 40% of the world’s trade passes, and 60% of the world’s energy passes. If the Chinese in that island chain If the presence becomes dominated, military or otherwise, I think it could pose a real crisis not only to our interests but to the broader interests of our partners,” Lu said. We are looking to establish a presence there.”

The United States has operated the American center in Male since 2004. The US ambassador to Sri Lanka and embassy staff is accredited to the Maldives and visits from time to time. After independence from Britain, America established diplomatic relations with Maldives in 1966. Beijing opened its embassy in Male in 2011.

Washington has become more focused on small island nations in the Indo-Pacific and Asia Pacific since China began more aggressive diplomatic outreach in recent years. Last month, China’s foreign minister completed a 10-day visit to eight countries in the South Pacific after signing a security deal with the Solomon Islands in April. But Beijing missed out on signing comprehensive security pacts with 10 island nations.

As part of its growing focus on China, the State Department is launching the so-called “China House,” an integrated team that helps coordinate and implement U.S. policy on China while combating challenges ranging from maritime security to misinformation. is planning to do.

US officials have for years accused China of advancing illegal maritime claims in the South China Sea, where Beijing has built military bases on uninhabited islands outside its recognized international borders.

Recently, the United States has condemned the genocide against ethnic Uighurs in the Xinjiang region of China. China has dismissed the claims and insisted that its detention camps in the region are training centers.

This week, US officials denounced the Chinese government’s social media posts that claimed US officials in Guangzhou had acknowledged the allegations of human rights abuses were fabricated. A State Department spokesperson told VOA that the false statements threaten US diplomats abroad.

“We ask the PRC to prevent US officials from making false statements or taking other action that could upset our diplomats. Such action potentially jeopardizes the names of US officials,” the State Department said. spokesperson told VOA.

“This is not the first time that US officials have spoken their true mind,” Chinese Foreign Ministry spokesman Zhao Lijian said during a briefing. Zhao called on the US to “stop its despicable steps to smear Xinjiang with political manipulation”.

On Wednesday, Deputy Assistant Secretary of State for East Asian and Pacific Affairs Camille Dawson told members of Congress that the State Department is requesting funds to expand US public diplomacy in the Pacific Islands and increase staff to counter Chinese propaganda. doing.

“The fiscal year 23 (fiscal year 2023) request includes 51 additional positions, 14 of which I believe are positions of public diplomacy. “We are also working through the Fiscal Year 24 request with a great deal of focus on expanding our public diplomacy resources, particularly in the Pacific Islands,” Dawson said during testimony at a House Foreign Affairs subcommittee hearing.

Lu said he has been a victim of “Russian and Chinese propaganda on an almost daily basis,” adding the US has invested in programs to support factual information to “fact-check waste emanating from Moscow and Beijing”. doing.

It is unclear whether the State Department’s newly announced China House team will report directly to Deputy Secretary of State Wendy Sherman, who has been tasked with managing strained relations between Washington and Beijing.

Politico reported that China House staff will increase from the current 25 China Desk officers to about 60, and will have access to secure phones and classified information. But it may take one and a half to two years for the China House to become operational.

The initiative to form the China House team is still in its early stages and is said to bring together individuals from various bureaus within the State Department to focus on the PRC.

Secretary of State Antony Blinken made the announcement about China House in a speech on May 26, months after the central intelligence agency said it was building a new China mission center in October 2021, which raised questions about “layers of bureaucracy”. .

“On the one hand, the focus[on the policy toward the PRC]is great, but on the other hand, do you really need it? I mean, we have a coordinating body, and it’s called the (White House) National Security Council. Said Mary Kissel, a former senior adviser to the State Department.

“This continuation (of a bipartisan China policy) is good, but these measures will (only) be worthwhile unless they have policy clarity and realistic policy from above,” said Kissel, who is now an independent financial services provider. Senior Policy Advisor. Firm Stephens Inc.