US cities named after Christmas 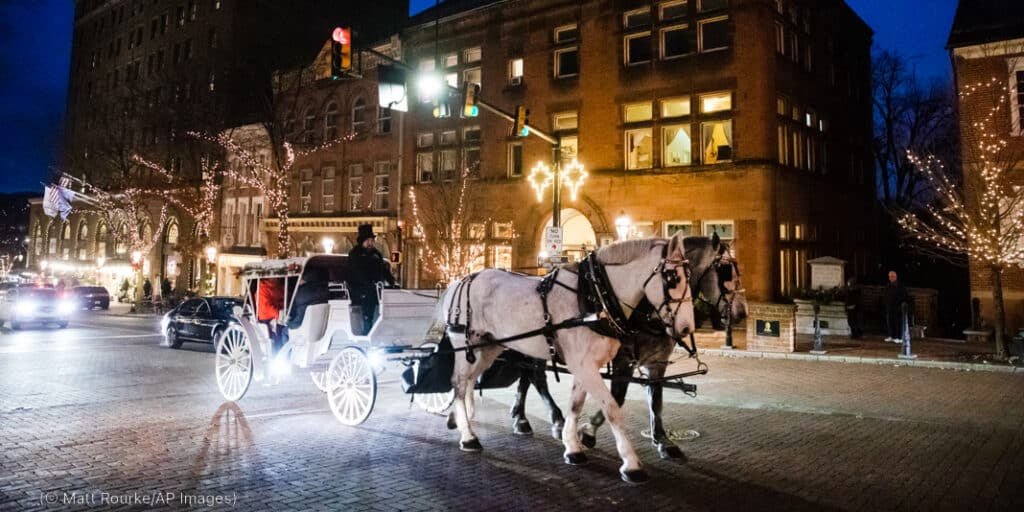 Whether by chance or inspiration, certain towns in the United States, from the North Pole in Alaska to Christmas Cove in Maine and Garland in Texas, receive special attention each December and, in a way, seem to embody the holiday spirit.

One Christmas Eve in the 1850s, families in Santa Fe, Indiana gathered in a log cabin to discuss a new name for their town. They wanted to introduce the town with a post office, but realized they could not do so unless they changed the name. According to Melissa Arnold of the Spencer County Visitor’s Office, postal officials said that another nearby town already had the right to be called Santa Fe.

Suddenly, a gust of wind flung open the door, and the sleigh bells rang. “Santa Claus!” (Santa Claus), the children shouted. And according to local legend the name was recorded. Since then, the town of Santa Claus, Indiana has embraced the Christmas spirit like a cozy blanket. Their local businesses include a campground on Lake Rudolph, Frosty’s Fun Center restaurant, Santa Claus Brewing Company, and a theme park called Holiday World.

“It’s the most festive city in the world,” says Arnold. “It’s Christmas all year long, but it really turns upside down in December.”

The town’s original post office is now part of the Santa Claus Museum and provides space for children to write letters to Santa Claus. Each year, a local student designs a Santa Claus postmark for the official United States Postal Service to use there. That postmark attracts visitors who want to mail their gifts and cards from the city.

Noel, Missouri, in the Ozarks region, calls itself a “Christmas town” and encourages people to send their holiday cards from there to receive a special Noel postmark. At Christmas in Florida, where a large tree is fully decorated year-round, volunteer elves help Santa answer children’s letters.

Charlene Donchez Mowers admits that the origin story of her hometown of Bethlehem (Bethlehem) in Pennsylvania reads like a movie script. The Pennsylvania town got its name more than two centuries ago on Christmas Eve, while church members were singing carols in the manger, says Donches Mowers, who works with the Bethlehem World Heritage Commission and the preservation group Bethlehem.Historic Bethlehem Museum and Sites,

Near Philadelphia and about 90 miles from New York, Bethlehem began as a Moravian missionary settlement.

Many of the city’s 18th-century buildings are still standing, and the decorated downtown for Christmas is so picturesque that Hallmark TV chose to feature it on their live cameras. A giant star on South Mountain, which overlooks the city, is lit year-round and can be seen for miles. Individual candles illuminate the windows of businesses and family residences, as well as many of the city’s historic sites. Horse-drawn carriage rides are held during the holidays and historic Christmas trees are decorated by the local Garden Club.

“It has a wonderful Christmas feel,” Donchez Mowers says. “It glows at night, and it’s beautiful during the day with historic buildings and the sound of hooves.”

Not all Christmas-sounding cities have a name for the holiday. Rudolph, Wisconsin, for example, is named after a child who was born long ago, though today locals try to associate the place with Santa’s red-nosed reindeer with 5K runs”.run rudolph run(Run, Run Rudolph) which is held in December.

The small coastal town of Christmas Cove, Maine is so named because Captain John Smith, who was instrumental in establishing the first English colony in Virginia, visited the cove on December 25, 1614. A lot to do with the timing of Christmas is the fact that tourism websites give directions on how to get there by boat.)

In the 1950s, landowners petitioned to change the name to Davis in hopes that toy manufacturers and others would want to set up shop there and stamp their products “Made in the North Pole”. Although that plan did not materialize, the city continues with the “streets” theme.snowman lane(The Way of the Snowman). It hosts a popular winter festival with fireworks, an ice sculpture contest, and live reindeer at a business called “Santa’s House,” which is perfect for those moments. instagram,