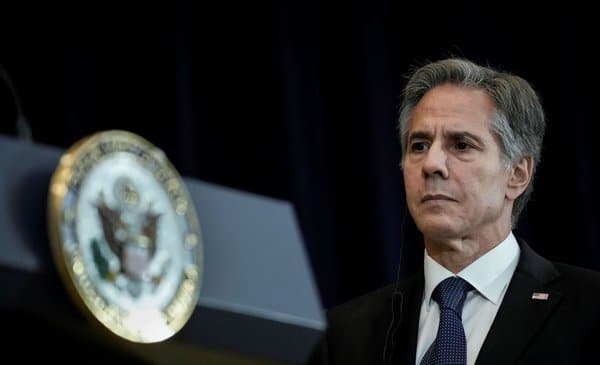 US Secretary of State Antony Blinken said that the United States in no way assisted Ukraine in launching drone strikes hundreds of kilometers inside Russian territory.

The attacks took place on Monday at military air bases where part of the Russian Air Force’s strategic bomber fleet is stationed, the Diaghilev airbase in the Ryazan region, and the Engels airbase near Saratov, located between 750 and 500 kilometers from the border. Ukraine.

Ukrainian officials have not formally confirmed drone attacks inside Russia, and have remained vague about previous attacks, such as against a Russian naval base in Crimea.

When asked about the attacks, Ukraine’s Defense Minister Olesky Reznikov repeated an old joke that he blames negligence on cigarettes. “Very often Russians smoke in places where smoking is prohibited,” he said.

Vladimir Putin has warned the United States and its allies not to cross the “red line” by supplying long-range weapons to Ukraine.

The United States, wary of escalating conflict with Russia, which has a vast arsenal of nuclear weapons, has never admitted to supplying long-range weapons to Ukraine, but has said it will provide them with its own weapons. Will not stop you from developing yourself.

Britain’s Ministry of Defense said Russia could regard the attacks on Russian targets more than 380 km from the Ukrainian border as “some of the most strategically significant failures in military security since its invasion of Ukraine”. Is.

On the other hand, at a briefing on Tuesday, Blinken accused Russia of “trying to eliminate the civilian infrastructure that allows people to have heat, water, electricity.”

He added that Moscow is “beginning of winter” and that “this is the daily and nightly reality in Ukraine.”

“We have not encouraged or allowed Ukrainians to attack inside Russia, but the important thing is to understand what Ukrainians are experiencing every day with the ongoing Russian aggression against their country,” he said.

US Defense Secretary Lloyd Austin insisted that the US would not prevent Ukraine from developing its long-range firepower.

“The short answer is no. We’re not going to do that at all,” Austin said, adding that Washington has already given Ukraine more than £16 billion in security aid.

A Russian pro-war blogger who posted on the Telegram channel “milinfoliv” on Monday criticized Russian military leaders, claiming that incompetence and the lack of proper fortifications at the airbase made the Ukrainian drone strikes possible.

Russia’s Defense Ministry said three Russian servicemen were killed and four others were injured by the wreckage, and two aircraft were lightly damaged in the attacks.

Retaliatory shelling by Russia killed Ukrainian civilians and caused power outages, leaving half the homes in the Kyiv region without power.