US energy grid faces huge problems amid effort to ‘electrify everything’ 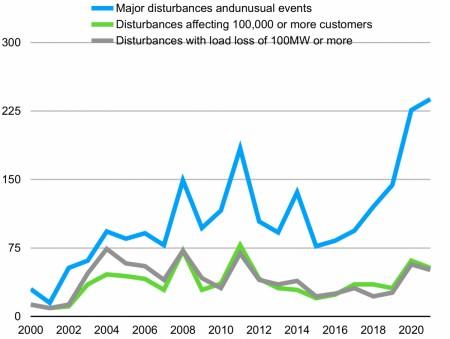 The Associated Press ( Associated Press) story covered two pages and began with a large headline, “Storm damages aging power grid.” In the accompanying photos, houses are seen overflowing and electric poles are uprooted. The gist of the story was that more powerful storms are here to stay and the power grid is in need of an upgrade. Just in case you think that’s an exaggeration, let’s say that, since 2000, the number of major system disturbances has increased, quadrupling the number of disturbances that have caused losses of 100 MW or more; And the number of glitches affecting 100,000 or more customers has also quadrupled. And it’s not because consumers are using so much electricity. But instead, the operating conditions have changed but the electrical grid has not. Figure 1 shows year-over-year trends.

Figure 1. Electricity Reliability Trends in the United States for 2000–2021.

Associated Press reporters quoted several experts as saying that the power grid needs more investment on transmission and distribution assets. Well, it can definitely help. But given that record, its variability and upward trend, perhaps the question should be: Should more money go to the power grid? What have power grid owners and operators for the past two decades been doing to prepare for the events predicted decades ago?

If electricity costs continue to rise while reliability issues persist, customers who need reliable power digitally may forgo utility solutions and invest in production and storage themselves. Renewable energy and the declining cost of batteries make that transition even easier from a financial standpoint. Will distributed reliability become cheaper than grid reliability? What we’re really asking here is, “Is long-distance power transmission even possible through vast, fire-prone areas?” This was not a problem when the electrical grid was originally designed and built. It would be an unreasonable utility to commit to rebuilding its transmission lines every year so that they could be burned again in wildfires.

This leads us to the politically charged question of energy equity. Do we as a society continue to allow or encourage wealthy individuals and corporations, who are able to install expensive self-generation and power storage equipment, to do so? Who gets left out in the dark, cold or heat in the summer—obviously those who can’t afford the significant investment behind the meter.

These conversations about grid reliability are also taking place against the backdrop of the “electrify everything” movement that began apparently with the transportation sector. This means even more demand on the grid from an increasing number of electric vehicle owners. Prolonged power outages, if they occur, will now begin to jeopardize even transport as vehicles cannot recharge batteries. We are facing a paradox with respect to grid based electric power. As a society we want to electrify as many sectors of the economy as possible for human health and other environmental benefits. However, we cannot “electrify everything” with a power grid that is increasingly unreliable.

An old slogan of the environmental movement was, “Small is beautiful.” We think this can be adopted as the new mantra for power transmission designers. Large sections of the country are becoming increasingly inaccessible to relatively weak power transmission systems due to wildfires, hurricanes, tornadoes and lines. And yes we can bury all these lines at a huge cost. But perhaps we should start to entertain the alternative, namely that locally produced electricity, running relatively short distances can increase reliability without unnecessary cost burdens.