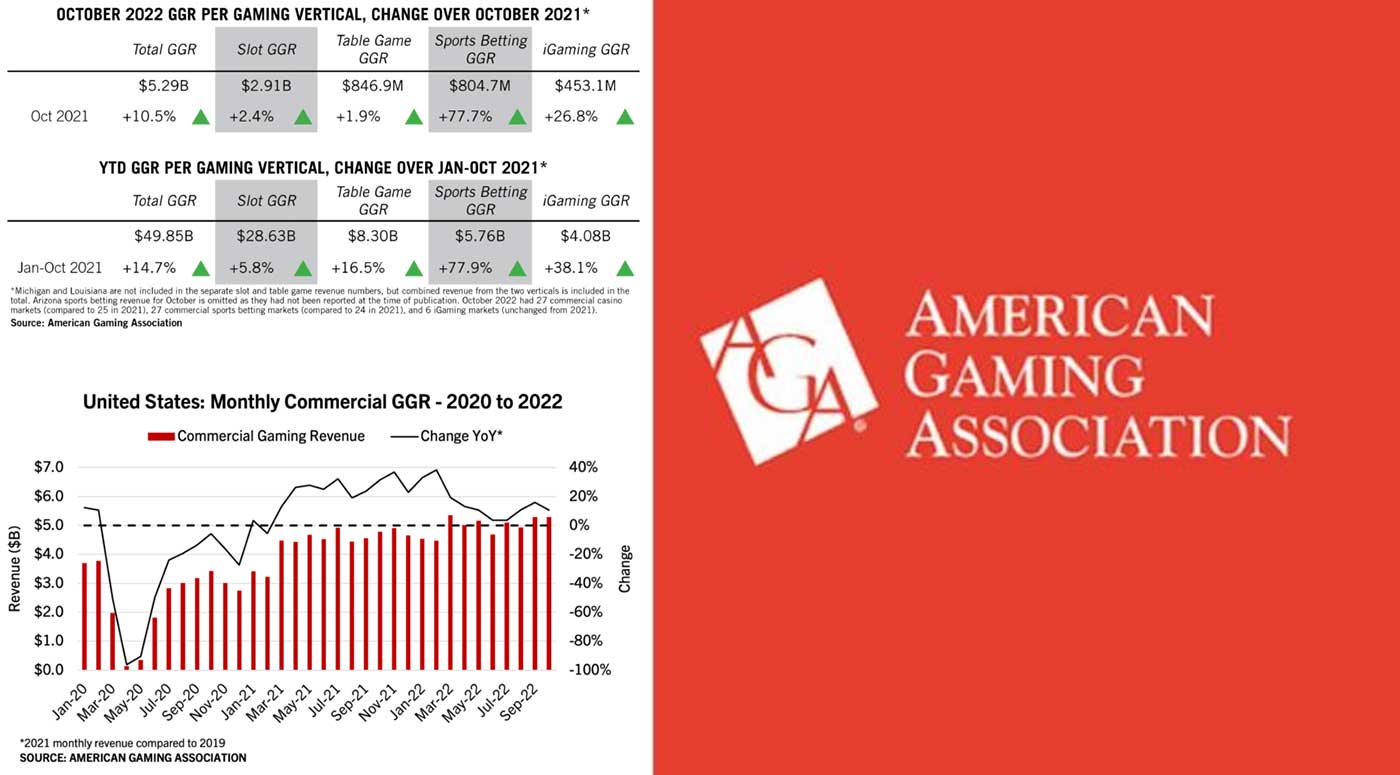 The US gaming industry maintained its momentum with revenue reaching $5.29 billion in October, a 10.5% year-over-year increase and marking 20 consecutive months of growth. October was the second month with the highest collection in the industry, surpassed only by March 2022 ($5.350 million).

Gaming revenue grew year-over-year across all regions in October, with nationwide iGaming revenue setting an all-time monthly record. Combined revenue from slot machines and table games at casinos was $4.03 billion, or 76.2% of total gaming revenue, while sports betting brought in $804.7 million (15, 2% of the total) and iGaming $453.1 million (8.6% of the total). , 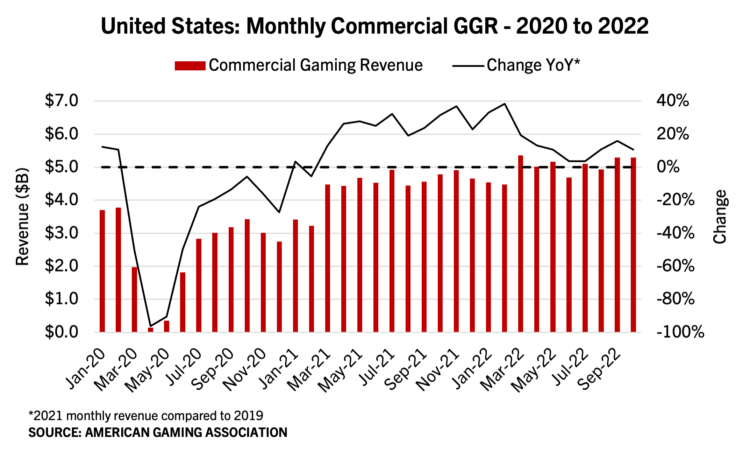 Combined, sports betting and iGaming added $1.26 billion in revenue in October, representing almost a quarter (23.8%) of total gaming revenue. Fueled largely by an intense sports calendar, September and October saw the highest proportion of gaming revenue from these emerging regions since the height of 2020 pandemic-induced casino closures.

Meanwhile, trailing 12-month revenue (TTM), which spans the trailing twelve consecutive months from November 2021 to October 2022, stood at $59.42 billion. TTM revenue grew by around 1% sequentially, i.e. compared to the prior TTM period (October 2021 to September 2022), reflecting the continued expansion of the industry. 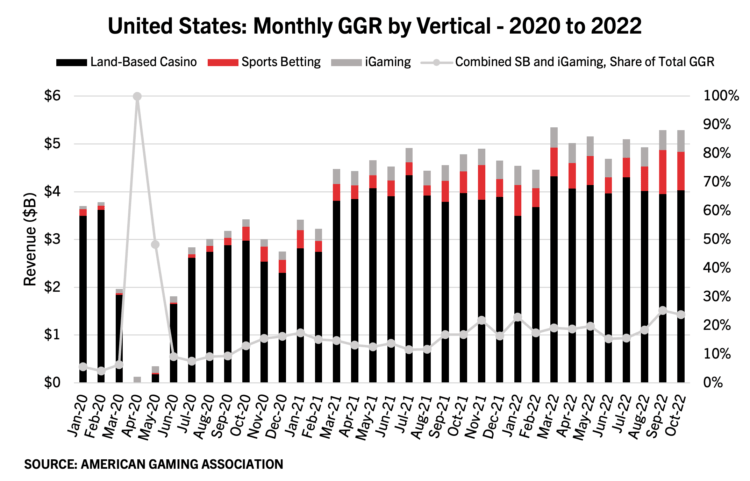 During the first ten months of 2022, only three markets lagged behind in their sports revenue momentum compared to the same period in 2021: the District of Columbia (-9.2%), Mississippi (-3.6%) and South Dakota (-0.6%) . While the District of Columbia’s revenue is sensitive to swings in the retention percentage of its smaller sports betting market, the downturn in Mississippi and South Dakota largely reflects a harder-than-average comparison because those states were forced to adapt to Covid restrictions in other states. In comparison to 2021 was already reduced. gaming market. 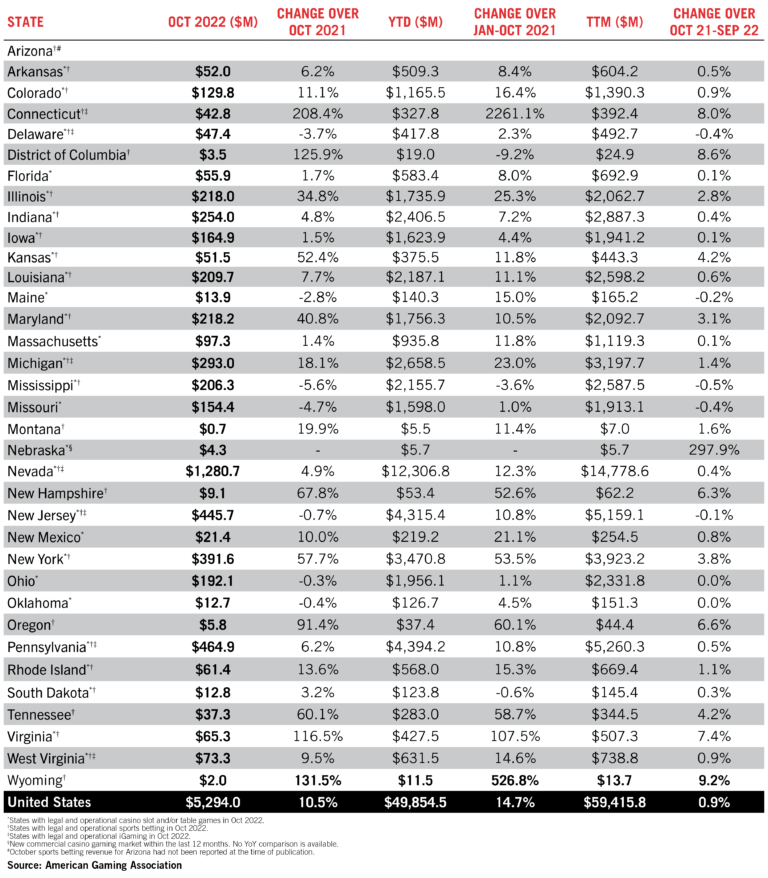 National revenue from slot machines and table games at land-based casinos was $4.03 billion in October, up 1.5% from the same period last year. Slots generated revenue of $2.91 billion, up 2.4%, while table games revenue increased 1.9% to $846.9 million. The separate statistics for slots and table games do not include data for Louisiana and Michigan, although their totals are reported in the combined statistics for the entire country.

October marked the first full month of land-based slot operations in Nebraska, which on September 24 became the 27th largest commercial casino market in the United States. The state’s first racetrack grossed approximately $4.3 million, a monthly revenue per slot equal to or exceeding that of many casinos in neighboring Iowa, Kansas and Missouri.

So far this year, casino slot machines and table games have generated $39.97 billion, up 7.4% from the same ten-month period in 2021. sector through October.

A packed sports calendar in October fueled the highest level of betting activity since January, as Americans bet $9.07 billion on sports across 27 legal commercial sports betting markets, generating $804.7 million in revenue. The figures do not include data from Arizona, which had not reported October figures at the time of publication.