US governors resist mandates and closings amid surge in omicrons 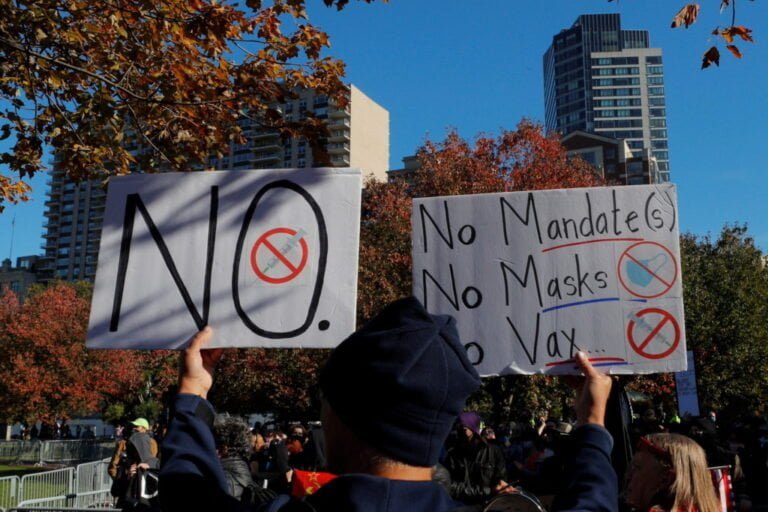 COLOMBIA, South Carolina (AP) – Governors have taken drastic action during previous outbreaks of the COVID-19 pandemic. Many have closed schools and ordered factories to close. They issued mask mandates, vaccine requirements, and even quarantines in some locations for people who traveled to out-of-state hotspots.

Not this time, even though the exponential spread of the super-contagious omicron variant is breaking records for COVID-19 infection. While governors direct aid to hospitals, they have shown little interest in widespread public order or work stoppages.

Even Democratic governors, who previously had strict mandates, now rely more on persuasion than diktat. They mostly leave it up to local authorities to make tough decisions, such as whether to limit the number of seats in restaurants and theaters or to keep schools open.

South Carolina set a record for the most positive tests on New Year’s weekend, and hospital admissions for COVID-19 rose 67% from the previous week. But Gov. Henry McMaster, a Republican, urged everyone to continue as if everything was in order. “If you get seriously ill, there will be places in hospitals,” he promised this week.

“There is no need to panic. Calm down. Be happy, ”McMaster said. “We just had a great Christmas season. Business is booming. “

McMaster urged people to get vaccinated on a regular basis, and in the early days of the pandemic, he ordered K-12 schools and colleges to move to distance learning. But students have returned to classrooms across the state, and he continues to resist imposed statewide closures.

California is grappling with a startling spike in infections and the state health department has extended its indoor mask mandate until February 15, but state Democratic leaders have not turned on a mechanism to enforce it. “I think a lot of people will act on their own and do the right thing,” Governor Gavin Newsom told reporters last month.

This feeling sounds familiar to Maryland Governor Larry Hogan. The Republican has declared a 30-day state of emergency to combat the omicron surge, but it does not include the same statewide mask mandate that was introduced earlier during the pandemic.

“I’m not sure that people who refuse to wear a mask will wear it anyway, and we have no way of getting them to do it,” Hogan said. So we just strongly encourage people to wear this damn mask.

At the time of this surge, New Jersey had the second highest number of cases in the U.S. after New York, and Democratic Gov. Phil Murphy asked the legislature to extend his emergency powers so that he can continue to wear masks in schools. But resumption of business closures and near-universal requirements for wearing masks do not seem to be discussed, and instead of issuing new orders, he urges people to follow public health guidelines.

“This is what we need to really take everyone to heart – the need to disguise, get support and just practice common sense,” Murphy said.

Even the governors who have pushed the most for restrictions during previous outbreaks have decided to urge people to take personal responsibility. In November, Oregon canceled the outdoor mask requirement and did not reinstate it. Schools and businesses remain open, and Democratic Gov. Keith Brown has called for additional vaccinations as the best way to fight the virus.

“We are now focused on ensuring that our most vulnerable Oregonians have access to booster shots and also being prepared to support our hospital systems,” Governor’s spokesman Charles Boyle said in an email.

Ohio Gov. Mike DeVine, a Republican, was one of the first to close schools in March 2020 as the virus began spreading rapidly across the United States. But his desire to take aggressive action waned, and since the summer he focused on voluntarily wearing masks. and vaccinations.

“At this time, we have no practical ability to order masks statewide,” DeVine said in late December. “I don’t think it’s appropriate at the moment. We have a vaccine. We have the tools. “

Montana Governor Greg Gianforte, listing his accomplishments in his first year in office on Tuesday, said that due to previous spikes in COVID-19, there was little difference in case counts between states ruled by Republicans, which tended to take fewer precautions. , and states run by Democrats. who usually took more drastic measures.

In North Carolina, Democratic Gov. Roy Cooper still leaves it up to local governments to decide whether masks should be mandatory in stores or government buildings rather than ordering them statewide, and encourages but does not require local school boards to maintain mask mandates for students and staff. …

Cooper took this path despite the fact that the Republican-controlled legislature lacked the veto-protected majority needed to overturn his previous statewide COVID-19 mandates.

“We’ll have to learn to live with it and continue to ensure that our children go to school and our businesses remain open and all of our government operations are efficient and effective,” Cooper said.

Population fatigue from the pandemic has prompted Utah Governor Spencer Cox to suggest that COVID-19 and its variants could be treated more like the flu or any other contagious disease. The focus should be on reducing the effects of the disease through vaccines and drugs, rather than government orders, he said. On Thursday, he urged people to wear masks as cases hit record levels and the state ran out of monoclonal antibody drugs, but did not call for new rules.