US minus Decker comes up short in Olympic final vs. Canada 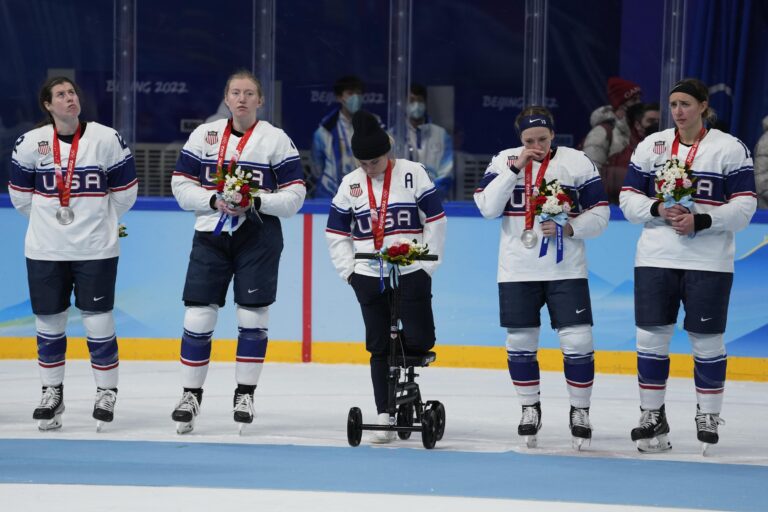 BEIJING ( Associated Press) — The United States may have lost the gold medal 10 minutes into the Olympics.

Two weeks before facing Canada in the women’s hockey final, the Americans watched first-line center and arguably their best player, Brianna Decker, get stretchered off the ice with a broken leg early in the tournament opener.

Try as they might to fill the gaping hole in their lineup, missing Decker proved to be too much to overcome in a 3-2 loss to the Canadians in the gold-medal game Thursday.

“I think that we did a good job coming back with it and sticking together as a team,” said winger Amanda Kessel, whose goal with 13 seconds left was part of a frantic finish. “But it definitely didn’t help us, and we definitely missed her out there.”

Replacement Abby Roque couldn’t cash in on the scoring chances that Decker might have. Even though Hilary Knight scored her sixth goal in Beijing and Kessel made things interesting in the final minute, the top-end talent for Canada came through in the clutch.

With Decker watching on the glass steps away from the bench, the US fell short and settled for silver for a fourth time since women’s hockey was introduced at the 1998 Nagano Games.

“It’s devastating. It’s heartbreaking,” Knight said. “It definitely stings. It hurts. It feels like we let our country down.”

The US never recovered from Decker getting tripped from behind 9:32 into the first game against Finland, breaking her left fibula and tearing ligaments in her ankle. USA Hockey opted not to bring the six-player taxi squad allowed by International Ice Hockey Federation officials in case of virus outbreaks, and potential replacement Britta Curl couldn’t join because she tested positive for COVID-19 before traveling.

All of it added up to adversity that hardened the Americans but eventually caught up to them.

“You lose your best player to a broken leg, you lose a coach, you have a coach go to isolation, you try to bring a player in (and) you can’t get that player in — these are just things that happened every day,” captain Kendall Coyne Schofield said. “We were able to overcome those. We have so much to be proud of.”

The US dealt with even more adversity in the weeks before traveling to Beijing. Goaltender Alex Cavallini tore the medial collateral ligament in one of her knees Jan. 14, an injury that did not require surgery but prompted plenty of rehab — and doubt.

“(I) didn’t even know if I was going to make it on the flight here,” she said after starting the gold-medal game. Cavallini said she felt numb after the loss and added, “I feel like I didn’t hold it in there for the team today.”

Knight, Kessel, Coyne Schofield and other stars of the golden generation that won five consecutive world championships and gold in Pyeongchang made sure the Americans got to the final, even with a scare or two along the way. Once they were there, the depleted depth showed.

While Canada dressed the full complement of 13 forwards and seven defenders, the US had only 12 forwards at the Olympics and coach Joel Johnson played 11. When his team fell behind by multiple goals, he shortened his bench: Knight, Kessel, Coyne Schofield, Roque and fellow forwards Alex Carpenter and Hannah Brandt all played over 20 minutes, while some got little to no ice time in the second and third periods.

Johnson said after the loss he wouldn’t do anything differently.

“As a coach, you always say shoulda, coulda, woulda in any situation: should’ve worked on power play in a different way, should’ve done this,” he said. “Line combinations and ice time are always once of those things that when you win, nobody asks that question. When you don’t win, all of a sudden everybody’s got curious questions.”

There’s no question how valuable Decker is to the US: She’s almost a point-a-game player and a respected leader in the locker room.

After the game, defenders Lee Stecklein and Savannah Harmon pushed Decker on her scooter into place to receive her silver medal. Brandt said she and her teammates got used to playing without Decker throughout the Olympics, but it was more noticeable against Canada that she wasn’t on the ice.

“Would’ve been nice to have her,” she said.