US Navy Successfully Tested MQ-8C Helicopter With Mine Countermeasures 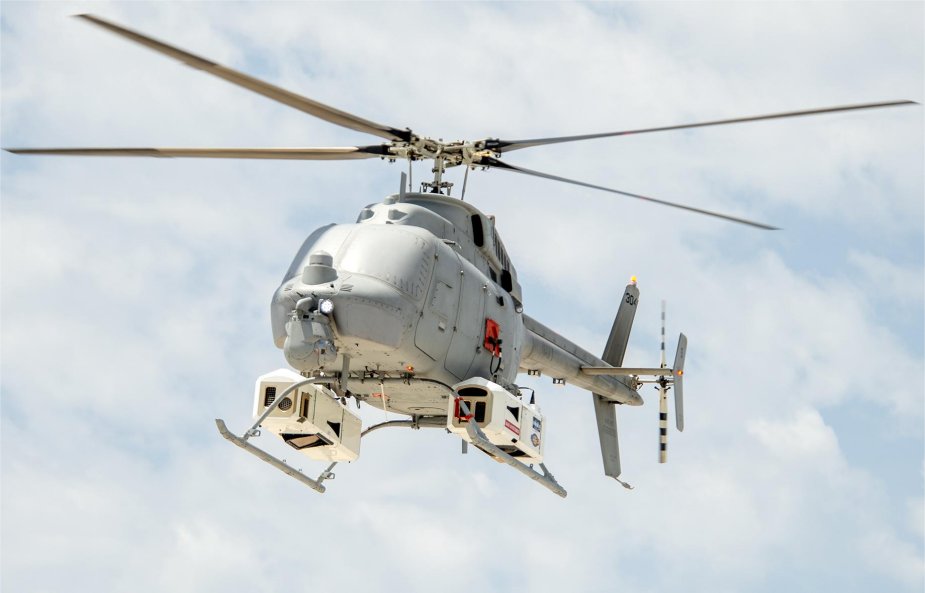 According to information published by the US DoD on July 8, 2022, the Navy recently demonstrated a Mine Countermeasure (MCM) prototype technology on the MQ-8C Fire Scout UAS at Eglin Air Force Base, Florida, which proved to be a capability Which could have allowed the war. To rapidly detect and respond to threats.
Follow Navy Recognition on Google News at this link

The purpose of the demonstration was to collect performance data for both the MQ-8C Fire Scout and Single-System Multi-Mission Airborne Mine Detection (SMAMD) systems to inform future MCM integration efforts.

The team conducted operations from the Naval Surface Warfare Center (NSWC) in the beach area using deep water drifting, tethered and moored mines. They collected data day and night, at all water depths and in mild to difficult weather conditions.

The performance also proved the reliable and repeatable high performance of the MQ-8C Fire Scout. The air vehicle handled the dual-podded system with ease, being the first MCM capability to be flown on the MQ-8C as well as the heaviest payload ever built. The Fire Scout operated successfully in restricted and unrestricted airspace along with other aircraft platforms.

The SMAMD system, developed by BAE Systems under the Future Naval Capability (FNC) program sponsored by the Office of Naval Research (ONR), is an airborne optical sensor suite that detects and localizes obstacles on land and mines in a single pass. Is. in Ocean.

With a low false-alarm rate, SMAMD provides real-time detection sent via a data link, enabling warships to respond much faster to threats than existing MCM technologies because of post-mission analysis. is required.

Read Also:  In Cuba, caution and confusion meet as US sanctions eased

The MQ-8C also has autonomous take-off and landing capability. It is designed to provide reconnaissance, situational awareness, aerial fire support and precision targeting support for ground, air and sea forces.

The MQ-8C airframe is based on the Bell 407, while the avionics and other systems are developed from the systems used on the MQ-8B Fire Scout. It first took off in October 2013 and achieved initial operational capability on 28 June 2019.