US officials speak out against Turkish plans for northern Syria 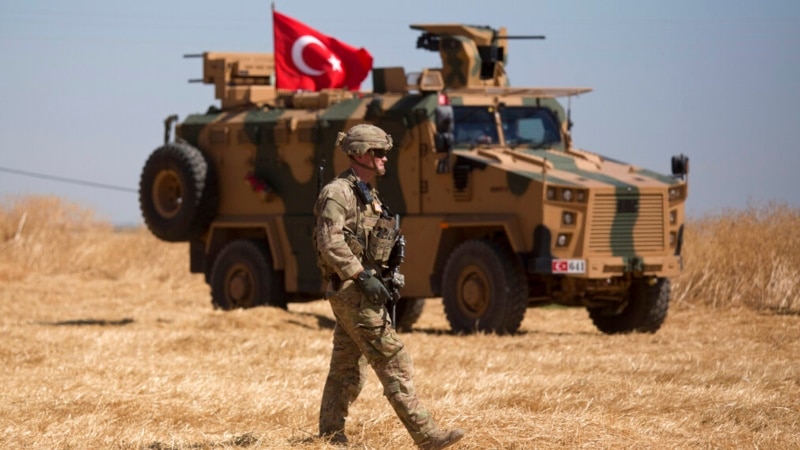 Senior US officials are voicing concerns that Turkey will soon launch renewed military operations in northern Syria, warning that such a move will endanger US forces in the region and have disastrous consequences in the fight against Islamic State.

Turkey has been threatening to expand an existing 30km-deep security zone on the Syrian side of the Turkish border since late May, sparking concern among US partners in Syria and a series of consultations between Washington and Ankara.

But those talks have failed to stop Ankara’s saber rattling, prompting several US officials to publicly stress the message that nothing good will come of another Turkish incursion.

“We strongly oppose any Turkish operation in northern Syria and have made our objections to Turkey clear,” Deputy Assistant Secretary of Defense Dana Stroul said at a forum in Washington on Wednesday.

“ISIS is going to take advantage of that campaign,” he added, using an acronym for the terrorist group, also known as IS or Daesh.

Stoul and other US officials said their concerns are amplified by a growing body of intelligence indicating ISIS intends to launch operations to free 10,000 fighters held in makeshift prisons in northeastern Syria, guarded by the Syrian Democratic Forces (SDF). SDF) backed by the United States.

“ISIS sees the detention centers where its fighters are housed as the population to reconstitute their army,” Stroul said. “If there are military operations that would make the SDF focus on moving north to protect their communities from an air or ground campaign, there is only a limited number of SDF to go around.”

An Islamic State attempt in January to break 4,000 fighters out of al-Sinaa prison in Hasakah failed, but only after the US-backed SDF swelled 10,000 troops to quell the uprising, with the help of US planes, helicopters attack and ground forces.

Still, the escape of around a dozen hardened and experienced fighters gave the terror group hope that the tactic will pay off, especially if the SDF must shift its forces to defend against a Turkish operation.

Unlike the US, which sees the SDF as an effective partner in the fight against IS, Turkey sees the SDF as a “terrorist syndicate”, a Syrian branch of the Kurdistan Workers’ Party (PKK), that both Ankara and Washington see as a terrorist organization.

Stoul said the United States recognizes that Turkey has legitimate concerns about PKK activity in Syria and Iraq and promised the Pentagon “will continue to work with Turkey to counter such activity.”

He warned, however, that a Turkish incursion would be going too far.

“Such an operation puts US forces at risk, the [global] the coalition’s campaign against ISIS, and will introduce more violence into Syria,” Stroul said, warning of further catastrophic consequences.

“The SDF, if they are under that kind of pressure, they will be put in the hands of our adversaries,” he said, pointing to possible SDF collaboration with Syria, Russia or even Iran.

“Increased military activity in Syria will only increase instability and opportunity for ISIS,” Timothy Betts told an audience at the Middle East Institute in Washington.

The US Agency for International Development also expressed concern that a Turkish incursion would exacerbate humanitarian crises.

“There are another 500,000 people who could be displaced,” said Andrew Plitt, USAID’s acting assistant administrator for the Middle East. “There is certainly a lot of diplomatic activity going on to try to temper any move by the Turks in that direction with respect to how destabilizing it could be.”

VOA contacted the Turkish Embassy in Washington, which has not yet responded to the US criticism.

The US has around 900 troops in Syria, most of them in the northeast supporting the SDF as they attack Islamic State cells in the region.

Intelligence estimates from the US and other UN member states have put the size of ISIS forces in Syria and Iraq at between 6,000 and 16,000 fighters, most operating as small cells in remote areas.

US, SDF and Iraqi officials also believe the group’s core leadership has been weakened by a series of attacks on high-ranking members, including a drone strike on Tuesday that killed Maher al-Agal, the top IS official. for his Syrian province.

However, there are signs that the IS core is at least trying to position itself for a comeback.

“He’s trying to revive himself,” according to Joshua Geltzer, the White House’s deputy national security adviser. “It’s a group that at least in small pockets right now continues to exercise or at least attempts to exercise some territorial control.”

Geltzer said that IS has already taken credit for at least 350 attacks in Syria and Iraq this year, and that there is also evidence that the IS leadership in Syria and Iraq can still exert influence over its affiliates around the world and share financial resources.

US officials announced Wednesday that a total of 39 US citizens have returned from Iraq and Syria since 2016, an increase of 12 since the Justice Department last released figures in late 2020.

The State Department said the 39 returnees include 15 adults, 11 of whom have been charged with crimes related to their support for IS, and 24 minors.

Justice Department officials previously said that two of the repatriated adults were not charged because they were minors when their families took them to join the Islamic State.