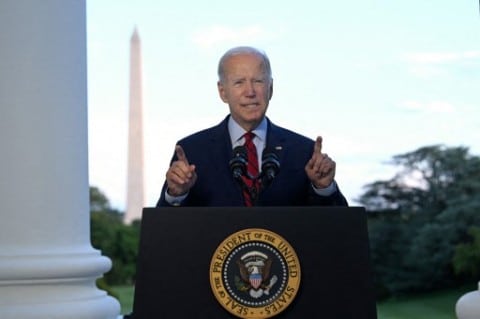 Washington: US President Joe Biden has welcomed a ceasefire between Israel and Islamic Jihad militants aimed at ending days of deadly conflict in Gaza. Biden urged all sides to implement a full ceasefire.

President Biden said in a statement that Washington had worked with officials from the Jewish state, the Palestinian Authority and various countries in the region over the past three days to “push for a speedy resolution of the conflict.”


“We call on all sides to fully implement the ceasefire and ensure fuel and humanitarian supplies are delivered to Gaza,” Biden was quoted as saying by the Daily Mail. AFPMonday 8 August 2022.

The president also expressed regret over the injuries and deaths of civilians in Gaza, but did not specify who was responsible. At least 44 Palestinians have been killed in the violence, including 15 children.

“The reports of civilian casualties in Gaza are a tragedy, either from Israeli attacks on Islamic Jihad targets or from dozens of Islamic Jihad rockets that reportedly fell in Gaza,” Biden said.

Since Friday, Israel has carried out heavy air and artillery bombardments on Islamic Jihad targets in Gaza. Islamic Jihad fired hundreds of rockets in retaliation.

Buildings in Gaza have been reduced to rubble, while Israelis have been covered by a barrage of rockets.

“As I made clear during my recent visits to Israel and the West Bank, Israelis and Palestinians alike deserve to live in safety and security and enjoy equal measures of freedom, prosperity and democracy,” Biden said, who traveled to this area. last month.