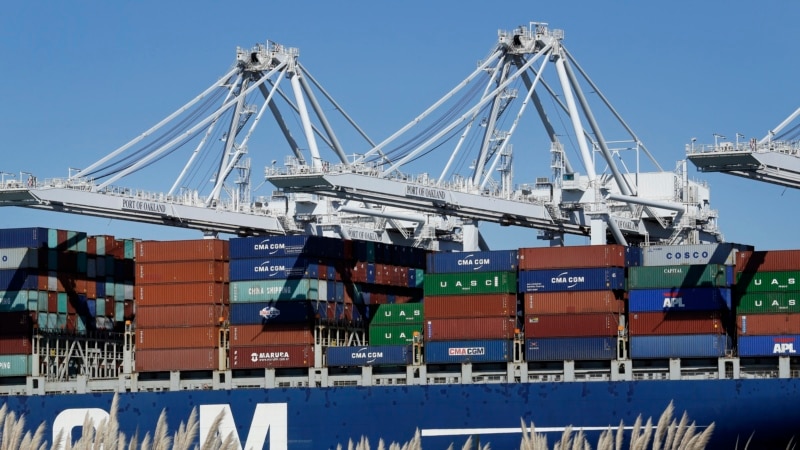 The United States posted its largest ever full-year trade deficit in the 12 months ending in December, according to data released by the Commerce Department on Tuesday, signaling continued strong economic growth and vibrant consumer demand as the country emerges from the recession induced by the COVID-19 pandemic.

In calendar year 2021, the US imported goods and services worth $859.1 billion more than it exported, a 27% increase over the gap in 2020 and the largest single-year figure since the government began tracking the measure in 1960. The next-closest was in 2006, when the deficit hit $763.53 billion.

In the month of December alone, the US imported $80.7 billion more than it exported, just shy of the one-month record of $80.8 billion set in September. The country’s total imports in December amounted to $308.9 billion, as compared with $228.1 billion in exports.

Although a trade deficit is often cast in negative terms, economists usually see it as a sign of economic strength, indicating a net flow of investment into the country.

“Whenever the US economy is doing well, the deficit gets worse,” Joseph Francois, an economist and the managing director of the World Trade Institute at the University of Bern, Switzerland, told VOA.

A strong US economy attracts foreign investment, helping to create new jobs and driving up consumption, much of which is targeted at goods manufactured overseas, Francois said.

“You’ve got more investment coming in, because people want to put more money in the US economy when it’s doing better,” Francois said. “And the result is the trade deficit looks worse, especially for merchandise. So in a sense, when the economy is doing what it is doing now – creating lots of jobs and recovering from the COVID recession – you’re going to see an increase in the deficit relative to the baseline that we had before.”

Francois also pushed back against the common misconception that a trade deficit in the US somehow translates into fewer jobs for American workers.

“The idea that somehow, if the deficit is big, you’re losing jobs just runs counter to the facts,” he said. “When the economy does better, the deficit gets bigger. Again, keep in mind, you want more investment. That’s what generates jobs. And you can’t have net investment unless you’ve got a trade deficit.”

A spokesperson for the National Security Council told VOA the White House sees the trade figures released Tuesday as part of a larger positive story about the direction of the US economy, while at the same time pointing to efforts to increase exports.

“Over the course of 2021, our exports also recovered from the pandemic-induced decline of 2020,” the spokesperson said. “For example, during President Biden’s first 11 months in office, American agricultural exports reached a record $160 billion, generated an estimated $342 billion in total economic output and supporting more than 1.2 million jobs here in the United States.”

The NSC spokesperson also mentioned the Biden administration’s efforts to sell more US goods abroad, noting agreements with the United Kingdom and the European Union on the sale of civilian aircraft and a broader agreement on steel and aluminum.

“That being said, the trade deficit does not determine American prosperity or American influence in the world,” the spokesperson said. “In fact, the recent rise in the deficit is primarily a sign of the strength of the economic recovery and the efforts the administration has made to resolve supply chain disruptions.”

The next-largest single-country trade deficit posted by the US in 2021 was with Mexico, which exported $108.2 billion more in goods and services to the US than it imported, a decline from a deficit of $113.7 billion in 2020.

The US also ran a net deficit with the countries of the European Union, importing $219.6 billion more in goods and services than it exported, an increase of 19.1% over 2020. However, the net deficit with the EU reflected roughly the same percentage of the total trade deficit, about 26%, as it had a year earlier.

US officials remain frustrated by the fact that China has not yet complied with the obligations it undertook in the so-called Phase One trade deal negotiated by the Trump administration in January 2020. The deal was an effort to lower tensions in the trade war that erupted between the two nations during Trump’s term in office.

Under the deal, the Chinese government had promised to increase its imports from the US by $200 billion over and above its pre-2020 levels.

An analysis released by the Peterson Institute for International Economics on Tuesday pointed out that since then, China’s purchases of US goods have fallen far short of those promises.

“In the end, China bought only 57 percent of the US exports it had committed to purchase under the agreement, not even enough to reach its import levels from before the trade war,” the analysis found. “Put differently, China bought none of the additional $200 billion of exports Trump’s deal had promised.”

In a press conference at the White House on Tuesday, White House press secretary Jen Psaki said that the Biden administration had, through the Office of the US Trade Representative, “expressed our concerns” about the issue. “It is on China to show that it can follow through on its commitment,” Psaki said.

Patsy Widakuswara contributed to this report.