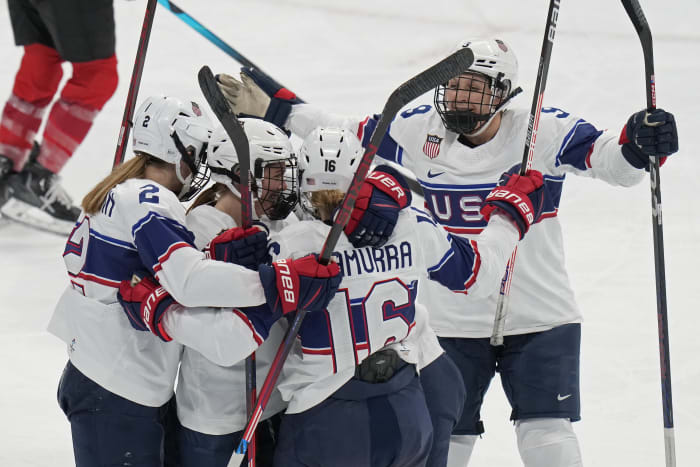 Kelly Pannek and Jesse Compher also scored twice for the Americans, who close Group A play against Canada (2-0) on Tuesday. The US improved to 3-0 and had 13 of 19 skaters earn at least a point.

The goal eruption came against a Swiss team which had been outscored by a combined 17-3 in losing its first two games, including a 12-1 loss to Canada on Thursday. It also provided the Americans some momentum a day after the they had 62 shots but struggled finishing in a 5-0 win over the Russian team.

Cavallini, who won an NCAA championship with Wisconsin in 2011, made her Olympic debut. Coach Joel Johnson has now rotated in all three of his goalies, with Nicole Hensley getting the shutout against ROC. Cavallini’s best save came 8 1/2 minutes into the second period, in getting across to her left to stop the Swiss on a 2-on-1 break.

Knight opened the scoring by driving to the net and converting his own rebound for a power-play goal 5:40 in. The game was essentially over when Compher, Knight and Pannek scored in a span of 2:11 to put the US up 4-0 by the 16:15 mark of the first period.

Compher one-timed in Hayley Scamurra’s pass into the slot. Knight intercepted a clearing attempt at the left boards and beat Saskia Maurer on the short side. And Pannek collected a loose puck in the right circle and fired it in. Amanda Kessel then scored from a bad angle to make it 5-0 with 22 seconds left in the period.

Knight now has nine career Olympic goals to tie Monique Lamoureux-Morando for fifth on the US list. And she increased her Olympic point total to 22, one behind Katie King, who ranks third.

The US, already missing top-line center Brianna Decker, averted a brief scare when forward Abbey Murphy limped off the ice after being tripped in the second period. Murphy returned to the ice a few minutes later. Decker broke her left ankle in a tournament-opening 5-2 win over Finland.

Switzerland, making its fifth Olympic appearance, is being outclassed at Beijing after finishing fourth at the world championships in August, and eight years after winning the bronze medal at the Sochi Games.

Saskia Maurer, making her Winter Games debut, stopped 17 of 22 shots before being pulled after one period. Andrea Braindli finished with 41 saves over the final two.

In the day’s only other game, Le Mi scored the lone shootout goal to secure host China a 2-1 win over Japan. By virtue of the shootout loss, Japan (2-0-1) earned a point to secure one of Group B’s three spots in the quarterfinals, the furthest the nation’s women’s team has advanced in three Olympic appearances.

China, in its Olympic debut, has five points and can clinch a quarterfinal berth with a win over Sweden in its final preliminary round game, or with one more loss by Sweden (0-2) or Denmark (0-2).