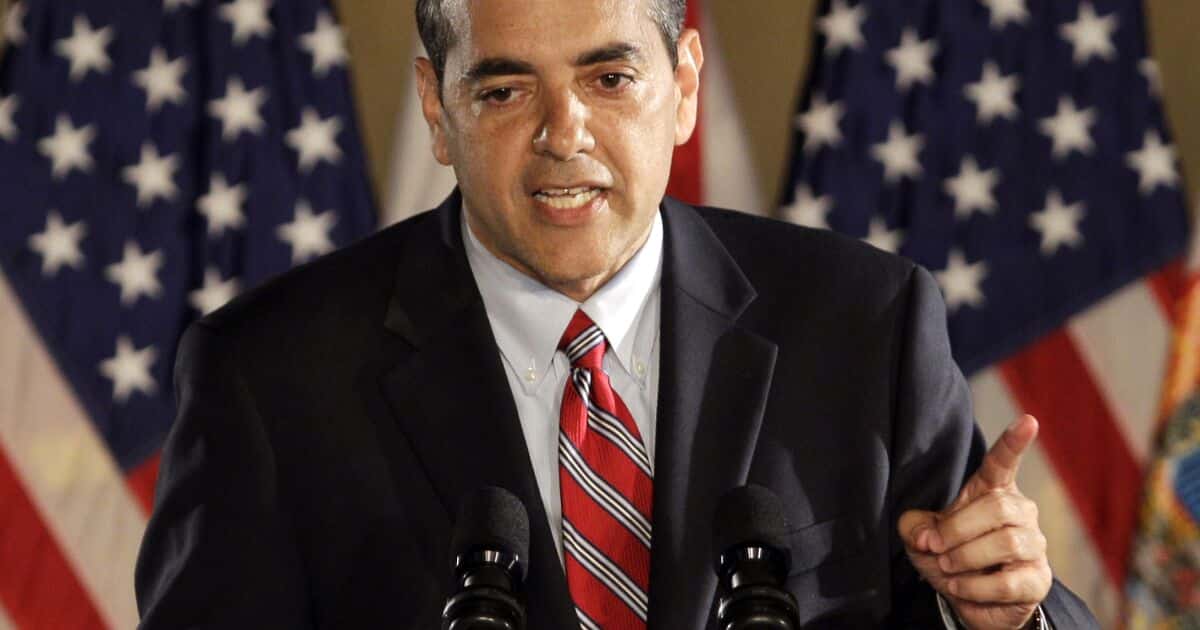 A former Miami federal lawmaker who signed a $50 million consulting contract with the Venezuelan government was arrested Monday on charges of money laundering and representing a foreign government without registration.

David Rivera, a Republican who served in the US Congress from 2011 to 2013, was arrested at the Atlanta airport, said Marlene Rodriguez, a spokeswoman for the federal prosecutor’s office in Miami. The eight-count indictment alleges that Rivera lobbied on Venezuela’s behalf to improve the South American country’s relations with the United States, resolve an oil company legal dispute and end Washington’s economic sanctions against Venezuela. was part of the plan, without registering as a foreigner. Representative.

The indictment mentions meetings Rivera would hold in Washington and New York, among other places, with senators, legislators and White House officials, none of whom were identified.

For example, the indictment alleges that in 2017 Rivera texted an unnamed federal senator saying, “Remember, the United States must facilitate, not merely support, a dialogue.” Reconciliation,” and “No Revenge, Reconciliation.”

Pressure on Rivera had been mounting for more than two years after it emerged that he had received a major contract from an American affiliate of Venezuela’s state oil company as President Nicolas Maduro tried to curry favor with the White House in the early days of his presidency. Were staying Donald Trump’s government.

Rivera’s company, Interamerican Consulting, was sued in 2020 by PDV USA, a local affiliate of Venezuelan-owned Citgo. The complaint claims the former lawmaker did not do any work as part of a contract he signed in 2017 for three months of “strategic advice” to establish relationships with important American figures.

In the indictment, prosecutors noted that Rivera sent a text message in October 2017 admitting he had to register to lobby for the Venezuelan government; Otherwise “my lawyer has told me it’s illegal at this point in time… and I shouldn’t touch it for anything but a huge scandal.”

Although Rivera’s contract was with a US entity, any work done on behalf of the Maduro government or Venezuelan business interests would have required him to register as a foreign lobbyist.

Rivera, 57, has affirmed he is innocent and filed a countersuit against PDV USA, accusing the company of breach of contract and unjust enrichment for not paying him the $30 million he claimed that they continue to pay him. An attorney for Rivera said he has not yet seen the indictment and Rivera did not immediately respond to an email seeking comment.

The Federal Marshals Service reported that Rivera was released from jail after posting bond on Monday, hours after his initial appearance in federal court in Atlanta.

Around the same time Rivera was hired, Caracas was trying to court the Trump administration, donating $500,000 to his inaugural commission through Citgo and initially blocking any criticism of the new US president. was avoiding Putin and North Korean leader Kim Jong-un.

The effort ultimately failed in 2019 after Trump recognized opposition lawmaker Juan Guaidó as Venezuela’s legitimate president and imposed an oil embargo against Caracas aimed at removing Maduro from power.

Correspondence filed in court as part of the lawsuit shows that Rivera and Gorín tried to arrange a meeting between Venezuela’s foreign minister and executives from the US oil company Exxon.

As part of those efforts, they also implicated Rep. Pete Sessions, whose former Dallas district was home to Exxon and who secretly traveled to Venezuela in 2018 to meet with Maduro.

A portion of the $15 million Rivera received as payment for his contract was transferred to two of his relatives and a Miami-based company: InterGlobal Yacht Management, which PDV USA claims was responsible for maintenance payments for one of Rivera’s yachts. was used for.

To justify the large payments, PDV USA allegedly created “false contracts” that date back to March 20, 2017, the day before their consulting agreement was to take effect.

Rivera’s contract had all the hallmarks of a farce, according to PDV USA, which since 2019 has been run by directors appointed by the Venezuelan opposition with US backing.

According to the lawsuit, Rivera’s Interamerican company earned only $9,500 a year before Maduro supporters took it off the air without due diligence. Rivera never personally met anyone from Citgo or PDV USA while allegedly acting on their behalf. Instead, it submitted two “poor and inconsistent” progress reports out of seven due.

“The written report is devoid of any evidence that Interamerican performed any of the contracted services,” argues PDV USA in court filings. “There is not a single email, a single Power Point presentation, an outline, a memo, a set date, or anything else that suggests that InterAmerican ever performed any service.”

Rivera has been embroiled in several election-related controversies, including his involvement in a plan to quietly fund an undisclosed Democratic candidate to run against his main rival in a South Florida race, as well as a state investigation that Did he hide a million dollar contract? Betting Company. That investigation also included the possible misuse of campaign funds to pay for state house activities that had already been reimbursed by the state.