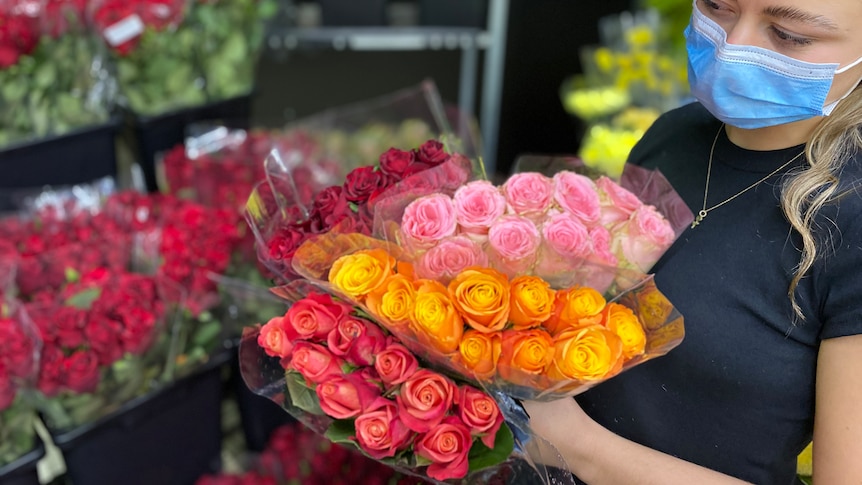 Valentine’s Day is one of the biggest days in a florist’s calendar but with increased freight costs and supply chain issues, florists say this year is looking less than rosy.

The supply issues have prompted Perth florist Rebecca Grace not to participate in Valentine’s Day at all this year.

“Mondays have always been the most tricky of days for Valentine’s Day and with the current COVID situation, roses and many other flowers are almost double the price,” she wrote in a social media post.

“On top of that, most of these blooms are being delivered early the week before Valentine’s Day due to a lack of flights.”

People wanting the traditional roses for their beloved tomorrow can expect to pay a premium.

Perth floral wholesaler Janki Shah said because most roses were imported from countries including Kenya and Ecuador on passenger flights, retail prices had jumped 40 per cent above pre-COVID prices.

“Pre-COVID to now, freight prices have gone up 300 to 400 per cent, depending on the location that they’re coming from,” Ms Shah said.

“There are definitely some customers who have chosen not to opt for roses because of the pricing crisis— they’re picking other things instead.

“We’ve definitely tried to make sure our fridge is really full of local and imported product, but I’m actually really excited to see what florists come up with this year.”

“We’re a carbon neutral business and we don’t use any imported flowers,” she said.

“We get our roses from Victoria … and we’re also being affected by Melbourne shipments due to the rail situation.

“There’s so much pressure on the small amount of stock that comes from the local growers.”

She said hot weather in Victoria had also affected supply.

“A lot of their Valentine’s Day flowers have flushed early because of the extended period of hot days, so what they do have at the moment is very limited.”

Customers should be aware of price hikes

Flower Industry Australia chief executive Anna Jabour said some florists were paying up to $120 wholesale for a dozen stems and customers should be mindful of price increases.

“It’s really important to be kind at the counter and support your local florist and local growers,” she said.

Ms Pow Davies said many customers did not understand the work that goes into creating bouquets.

“Valentine’s Day is a day where people who don’t normally buy flowers generally buy flowers, so that expectation there is already quite heightened,” she said.

“We really try to be affordable and our prices include delivery, but there’s a lot that goes into it.”

“Valentine’s Day and Mother’s Day are definitely the two biggest days for the year.

“And we would be doing maybe six times what our normal amount would be for those days.”

Why are roses imported from overseas?

Ms Shah said most roses sold in Australia were sourced from Kenya, Ecuador, Colombia and Ethiopia because of favorable weather conditions.

,[They have] an equatorial climate where you’ve got a similar temperature all year round and it’s also high altitude,” she said.

She said there were just a “handful” of WA growers.

Ms Jabour said while the demand for local roses had increased because of the pandemic, flowers from overseas still dominated sales.

“Imported flowers have had a stranglehold on the industry for the past two decades, unbeknownst to the Australian public,” she said.

“We have been calling on the government to mandate country of origin labeling for flowers so consumers and florists know that they are buying and supporting Australian growers.”

Read Also:  Shelter on Earth can save us from global catastrophe