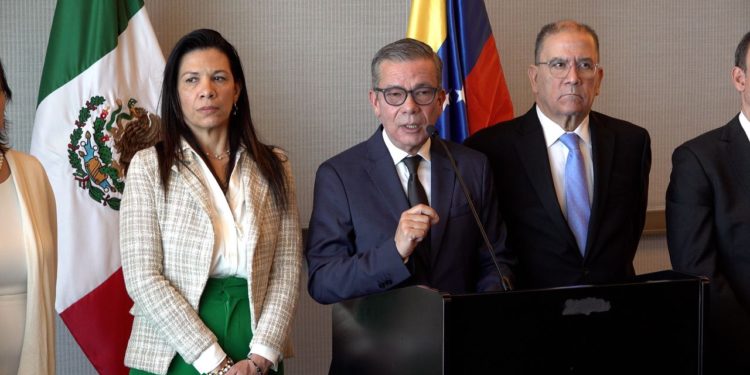 The Venezuelan opposition, grouped into the Unitary Forum, denounced this Saturday that the Chavista regime “wants to walk away” from the agreements that resulted from talks that resumed a week ago in Mexico, and demanded that dictator Nicolás Maduro vow to continue. A date has been set for December. Dialogue.

In a statement, the forum said, “We demand that Nicolás Maduro not delay the commitment assumed in Mexico and proceed immediately to set a date within the month of December to continue the dialogue with the political and independence agenda.” ” Posted on his Twitter account.

In the letter, the coalition stressed that talks between the opposition and the regime resumed in Mexico on 26 November after a one-year suspension, as its next step to tackle “political and independence issues” during the month , but that the Venezuelan regime “has activated a series of actions that seek to break away from the agreements.”

He clarified that the next issues to be addressed at the negotiating table would be the freedom of detainees considered political prisoners, the return of families of Venezuelans and exiles in the country, and “free votes”.

According to the opposition, the regime “lies about the scope of the signed agreement and, in addition, sets new conditions for further political advances that are not part of previous agreements.”

In this sense, he assured that the official delegation uses the strategy of “making and making the opposition visible” in order to “simulate a dialogue that would only be to their advantage.”

This Friday, dictator Maduro held a meeting with the opposition group in the Alianza Democratica parliamentary faction, a group that is at odds with Mexico’s anti-Chavistas.

After this meeting, the regime announced that it was preparing a document in which it would set out the agreements made with various sectors of the opposition in social, economic, political and electoral matters and that it would be presented within 30 days.

Maduro set a condition for the lifting of sanctions to hold free elections in his country. In a meeting with journalists at the Miraflores Palace, he called for the removal of all measures that burdened the regime.

And he delineated: “That they remove all (restrictions) to go to fresh, beautiful, good elections, at the time the constitution determines and with the National Electoral Council as the governing body.”

He then referred to the accord signed with the opposition in Mexico last weekend. “It is an agreement that has very important components of a social nature for the life of Venezuelans and its essence is the recovery of more than 3,000 million, deposited and hijacked in bank accounts in the United States and Europe that belong to Venezuelans.” He said…