Venezuela’s foreign minister reaffirms willingness to hold talks with US 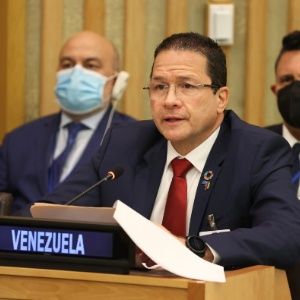 Venezuela’s Minister of People’s Power for Foreign Relations, Carlos Faria, confirmed this Friday that Caracas is ready to hold talks with the United States government to normalize bilateral ties.

ALBA-TCP will evaluate regional challenges in its Political Council

The Foreign Minister said in an exclusive interview for Telesur that “President Nicolas Maduro talks about the constant dialogue, talking to whomever he needs to talk to, to try and normalize the situation in our country.” about their desire to do so.”

In this sense, he said that “it is sustained. The delegation has arrived from the US administration, the President has looked at them, they have given very specific answers to the issues that are related to energy supply”.

In return, the Venezuelan diplomat stressed that it “demonstrates through the facts that, effectively, President Nicolas Maduro is always ready for dialogue, peace and normalization of the situation around our country.”

On the other hand, with regard to the reopening of the borders with Colombia, he pointed out that “it is planned to reopen the borders this Monday. There will be many programs to open the way which should never have been closed.”

Accordingly, Faria reported that “about 2,200 kilometers of our Colombian brethren are going to return to normal. Whatever the issue of trade and migration of our people, it will be re-circulated.”

Regarding Venezuela’s participation in the 77th session of the United Nations General Assembly (UN), he said that there have been many contacts with representatives of different countries.

In this regard, he said that “we have received instructions from our President to hold as many meetings as possible to spread the message of Venezuela.” Till yesterday, 46 bilateral meetings have been held, this figure may increase to 70.

At the same time, the foreign minister said in her speech this Saturday “the main thing is to condemn the situation that has plagued our people for many years, which are unilateral coercive measures.”

Faria stressed that “the issue of peace is a very important element in the current situation because of the conflict in Ukraine. We cannot allow that conflict to go beyond the limits in which it is currently located.”

Similarly, he addressed the issue of economic growth in Venezuela, which this year is the largest in the region because “according to institutions specialized in this matter, the growth is estimated to be 20 percent.”

The Venezuelan representative assured that “this has been possible thanks to the leadership of our President Nicolas Maduro, the creativity of our workers, the government team that accompanies the President.”