Later, three videos started circulating on the social network, showing The destruction of the mercenary base.

Ukraine destroyed a Russian mercenary base in the Luhansk region

The attack was launched in Popasna, south of Severodnetsk, confirmed Sergui Gaidai, the Ukrainian governor of the Luhansk region, as well as several pro-Russian war journalists. The number of victims has not been mentioned in the report.

“The Ukrainian Armed Forces again successfully attacked the enemy’s headquarters. This time in Popasna, where a PMC Wagner base was destroyed. The death toll is becoming clearer. At the same time, on the front lines, The Russians are actively deploying attack and army aircraft – air strikes were recorded in three populated areas“, Told.

Gaidai also sheds light on how that headquarters was attacked, noting The Ukrainian army “hit an enemy headquarters whose whereabouts were established thanks to a Russian journalist.” Furthermore, he indicated that it was “Headquarters of the Wagner Group in Popasna”Referring to a private paramilitary organization that is not officially recognized by the Kremlin, but which plays a leading role in its operations abroad.

The location data emerged from a recent visit by mercenaries to Russian correspondent Sergei Sereda, who uploaded photos of their tour to Telegram last week., After months of fighting and destruction, the Donbass is in the hands of the invading troops.

The images uploaded by Sreda have a sign with the address of the nearest shelter: 12 Myronivska Street. Just a few meters away, at number 8, was the building allegedly used by the Wagner group, which led to the Ukrainian attack.

The reporter’s message was later deleted, but impersonated copies on other channels remained. 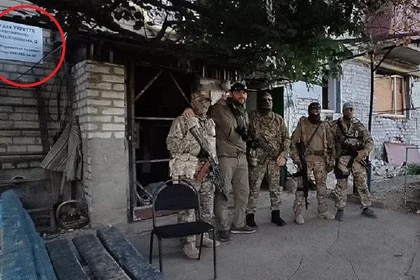 Description in the photo: Address along No. 12 Myronivska street. Analysts doubt whether it was a mistake or was included intentionally.

After the offensive, with an unknown balance of dead or wounded, it was discovered that the oligarch could have died. Yevgeny PrigozhinKnown as “Vladimir Putin’s Chef” and very close to the Russian President, as someone with similar characteristics was seen in one photo.

However, there has been no official confirmation of his status. Prigozhin had previously traveled to the Donbass to coordinate operations, but this would not be the first time that false reports circulated about his estimated death, which are usually not denied.

As far as the attack is concerned, Ruslan Leviev, founder of the Conflict Intelligence Team, an independent Russian organization that investigates incidents in the region, suspected the photo was an unintentional mistake, hinting at the possibility. That it was a deliberately omitted clue. As he suggested, It is possible that this was a temptation to provoke a reaction from Ukraine and thus reveal the exact artillery location, Handed over to Kyiv by the Western Allies.

Ukraine destroys Wagner Group base, mercenaries in Putin’s service: a photo reveals its location
Ukraine warns that the threat of devastation in Zaporizhzhya grows every day: “Russia is engaged in nuclear terrorism”
Putin’s Public Enemy No. 1 exposes the dark web of corruption and murder