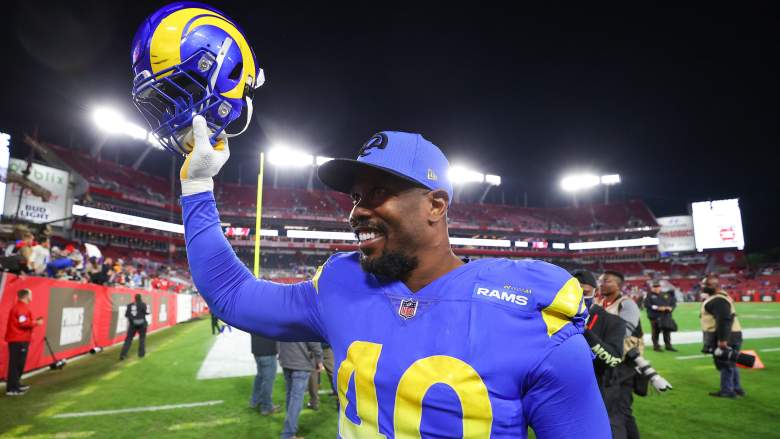 Von Miller celebrates the Rams’ playoff win over the Buccaneers on Sunday, January 23.

We already saw what adding one linebacker via the Denver Broncos did for the Los Angeles Rams this past season.

Luring in Von Miller ignited the pass rush, took pressure off the likes of Aaron Donald and Leonard Floyd and in the end, earned the franchise their second-ever Vince Lombardi Trophy…and the Rams’ first Super Bowl title since the 1999 season.

Now, with free agency looming, Miller is facing questions about his future in LA as a free agent. But he has expressed interest in coming back to the Rams.

But any chance that Miller will be joined by a familiar face from his Rocky Mountain days? One NFL analyst believes Miller’s new team should “prioritize” adding to the Rams’ linebacking core with one ex-teammate of Miller.

In a Friday, February 25 article that pinpoints which free agent every NFL team should sign, Jordan Dajani of CBS Sports mentioned Alexander “AJ” Johnson of the Broncos as the top signing the champs should consider.

That means getting the team’s leader in combined tackles during the 2020 season to team with Miller again — plus bolster the interior part of the Rams’ LB unit. Here’s what Dajani wrote:

“The Rams will be focused on retaining key pieces this offseason and running it back. They likely won’t be trying to reset the market with top players. Alexander Johnson is an interesting story, as he is 30-years-old and has played just 38 career games due to a late start in his career. He played just six games due to injury last year, but led the Broncos with 124 combined tackles and was second on the team with two forced fumbles in 2020. He’s a flexible inside linebacker and a fun teammate. Johnson would make the Rams better, and he’s one of PFF’s 10 under-the-radar free agents.”

The 6-foot-2, 255-pounder Johnson is indeed an aging defender. He was also limited to six games this past season due to a torn pectoral injury he sustained in October 2021.

But, he would add an extra veteran presence to a defense that has no shortage of veteran leaders — but can provide a veteran voice for a position group that can use a sure tackler.

What Miller & Alexander was Able to Accomplish Together

When paired on the field, Miller and Alexander was an underrated rush duo.

Here’s one example of how they worked in unison on quarterback blitzes before Miller got shipped away:

Johnson also nearly came away with an interception against the Pittsburgh Steelers during their October 10 contest — which would eventually become Miller’s last month with the Broncos.

And before going their separate ways, the Broncos got creative when Johnson and Miller lined up together: Particularly this loop attack Johnson provided against the Tennessee Titans:

Remember how I mentioned Fangio’s use of the 1-4-6 last week?#broncos rode it to Von Miller / Alexander Johnson sack when Tennessee was forced to pass late in the game. Coverage once more holds up its end to give the rush time. pic.twitter.com/MGhhvYoRIs

Johnson’s Value & Fit for the Rams

Johnson was on a one-year deal worth up to $3,384,000. That dollar figure also represented his base salary according to Spotrac.

Even in a truncated 2021, Johnson was still able to average five tackles and three solo stops a game, plus matched his previous best total in 2019 of three pass deflections.

Should he come on board, it’ll either come at a lesser deal or with some contracts restructured.

But here’s another reason why Johnson could be worth luring in: The recent history of reaching a Super Bowl when an Ex-Bronco star gets added.

Back in the 2018 offseason, the Rams added Broncos perennial Pro Bowler and Super Bowl champ Aqib Talib at cornerback. The Rams went to the Super Bowl that season. Miller went from Bronco to Ram to the title winner. Perhaps Johnson could continue this rare trend in the “Rams House.”

Read Also:  How the Rams set the Bengals up for failure on Super Bowl LVI's most important drive