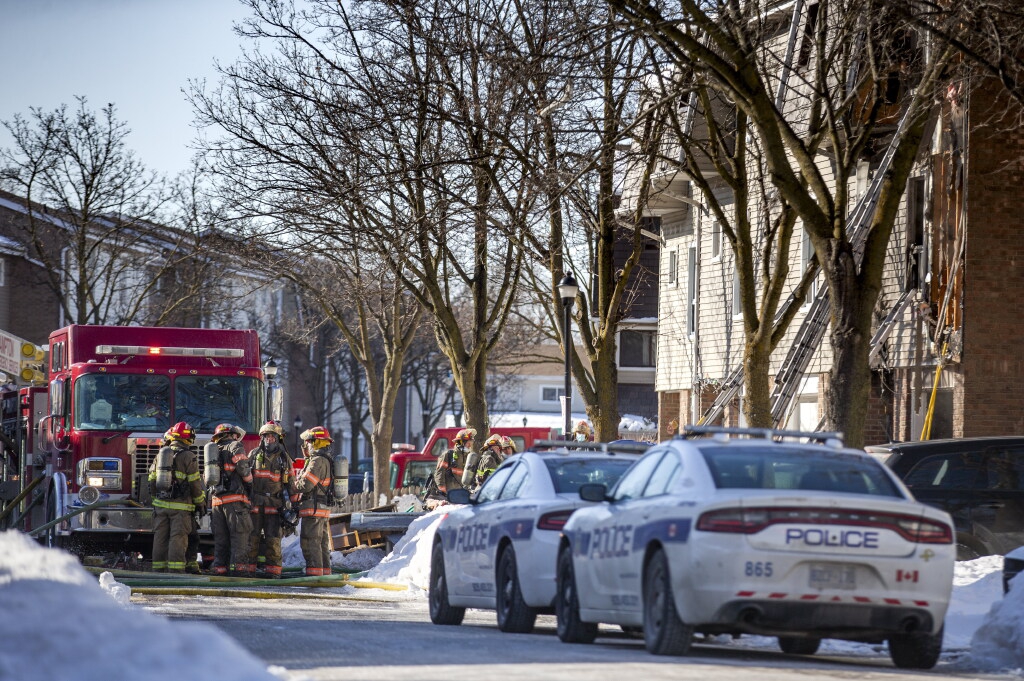 BRAMPTON — The terror and screams of three boys who died inside a Brampton townhouse inferno Thursday morning will haunt first responders and neighbors for the rest of their days.

Those three brothers — aged 9, 11 and 15 — could not escape the fire at Torbram Rd. and Clark Blvd. and as a result a whole community is shaken.

No one was more distraught than the first responders who could see the kids in the window but could not make their way through the heat and smoke. They kept trying but the flames were burning out of control.

“Many of our officers were on the scene of the fire very quickly today and attempted to enter the home to try to save the children,” Peel Regional Police Chief Nishan Duraiappah said Thursday.

While this wasn’t a miraculous life-saving story, it was not for lack of trying to make it one.

“This is a very difficult day. We mourn with the family and the community,” he added.

The pain was felt across the province.

“I want to acknowledge the efforts of all the firefighters on scene who faced extremely challenging fire conditions and risked their lives to try to save these three children,” Mayor Patrick Brown said.

Premier Doug Ford echoed Brown’s thoughts on the fire crews, saying “they did everything they could.”

This whole ordeal started with a 911 call at exactly 9:11 am

Sources say it was one of the boys who made the call. It seems their mother had taken the youngest child to school while the others were doing their studies online.

My heart breaks for this family and the entire community affected in #brampton, I echo Mayor @patrickbrownont in thanking the brave #firefighters for their efforts. I understand they did everything they could. This is an absolute tragedy.

When the call came in, they dispatched every emergency service as fast they could. They arrived in minutes.

“That was a tough call for the operators,” said one copper. “They could hear the kids screaming.”

First on the scene, four Peel Regional Police officers tried to get into the house.

But the flames were raging. The heat and smoke was intense.

“Two tried to go to the front and two to the back,” said a sombre Const. Akhil Mooken, adding they are all suffering from extreme grief.

Brampton Fire Services battled the fire and tried to get in windows to save the kids. One firefighter was injured.

“This is a tragic day, to have three young children perish in a fire,” said Brampton Fire Chief Bill Boyes. “It’s absolutely horrible.”

Firefighters managed to get the kids out of the burning home but extensive CPR did not work.

“They all did everything they possibly could,” said neighbor JR Kimono. “The whole street is so upset. We are in shock.”

Neighbor Pawel Jakubowski said the “flames were too high, even for the fire department.”

“My kids lost their friends. They all played together,” he said. “You can’t imagine what the mother has to go through now.”

Two of the children are said to have been special needs kids. A fundraising effort is being organized for the mother and surviving sibling.

“They were such good kids,” said neighbor Allison Carey. “Our heart goes out to (their mother). I can’t imagine what she is going through.”

Police expect to release the identities of the three boys on Friday.

We apologize, but this video has failed to load.

Meanwhile, the Ontario Fire Marshal is investigating the cause of the fire.

Neighbors say the blaze was fierce and escalated quickly,.

Neighboring units were also scorched by the flames. But homes can be rebuilt — a shattered family cannot.

And now the first responders who tried to save these three precious boys will forever remember their final moments.

From our newsroom to your inbox at noon, the latest headlines, stories, opinion and photos from the Toronto Sun.

The next issue of Your Midday Sun will soon be in your inbox.