The legislature of Washington State has approved a spending measure of US$150 million (CA$192 million) to proceed with advanced planning work on the proposed Cascadia high-speed rail passenger service linking Vancouver, Seattle, and Portland.

The funding is just one component of an approved 16-year, US$17 billion (CA$21.7 billion) comprehensive transportation expansion and improvement plan introduced by the Democrats. In the final vote on Thursday, it saw bi-partisan Republican support on the floor.

During media availability following the decision, Governor Jay Inslee deemed the plan, called Move Ahead Washington, to be the “cleanest and greenest transportation package in the history of Washington.”

The state government’s funding for the high-speed rail planning component takes advantage of up to US$700 million (CA$894 million) in matching federal funding that could be made available by President Joe Biden’s US$1 trillion (CA$1.28 trillion) national infrastructure plan.

Funding from both the state and federal governments — potentially up to US$850 million (CA$1.09 billion) combined — would push the high-speed rail project to a new phase of advanced planning. This would include more detailed technical work, geotechnical studies, environmental impact studies, public consultation, and development on a business case and funding models.

In December 2020, a report summarizing the project work-to-date stated the next step to move the project into further planning development would be to establish a new coordinating organization based on the tri-jurisdictional partnership agreement.

Preliminary estimates made in 2019 put the total cost of detailed planning, final engineering and design, and construction of the project between US$24 billion (CA$30.7 billion) and US$42 billion (CA$53.6 billion), based on construction occurring from 2027 to 2024 , with the service opening in 2035.

As many as 30 roundtrips could be made per day every day of the year, depending on the scenario, using 260-seat trains. It would see 2.1 million annual riders upon opening, with ridership growing to 3.3 million annually by 2055. 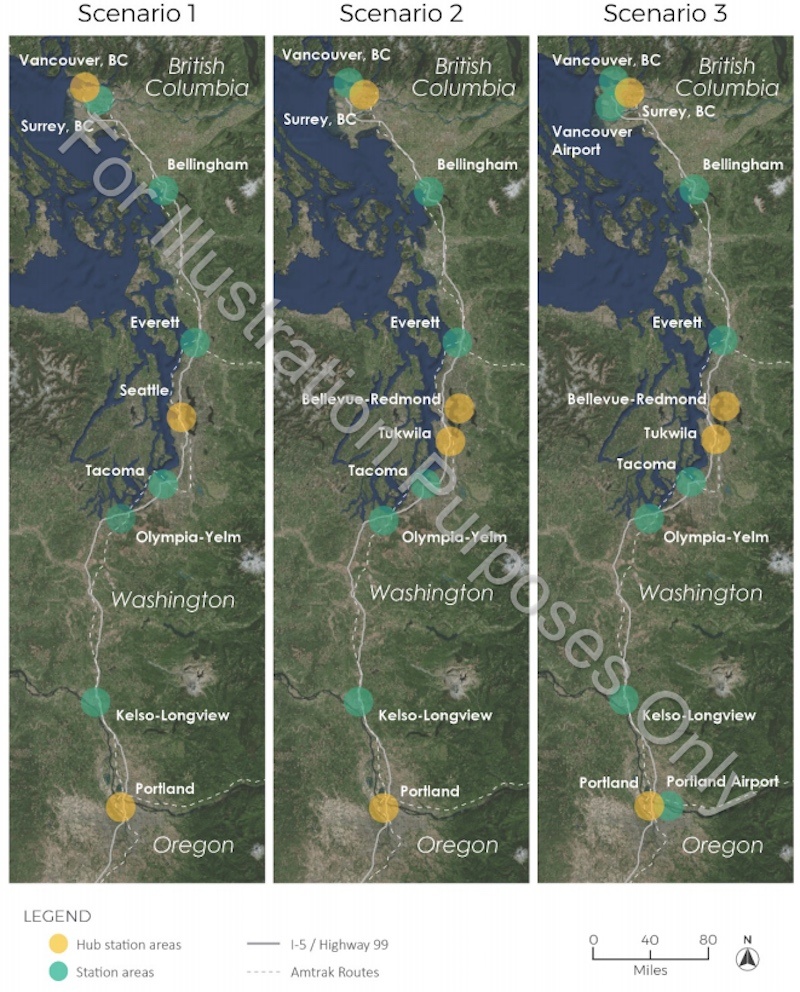 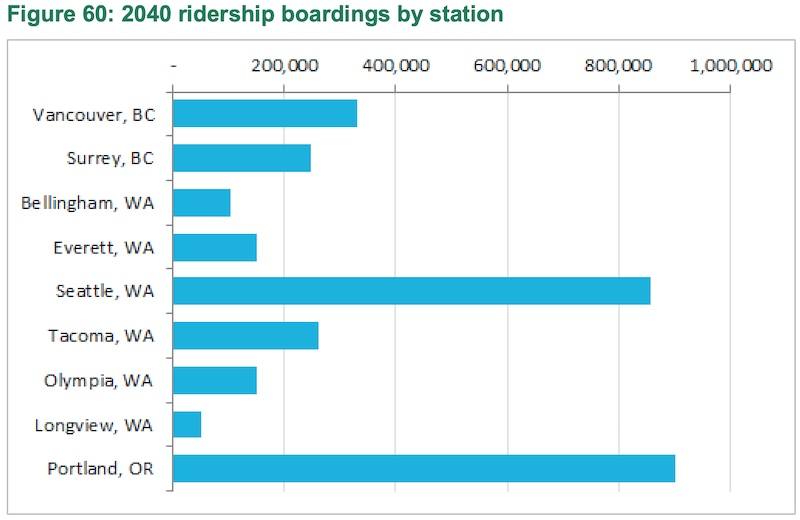 The line would run from Metro Vancouver (with stations in downtown Vancouver or Surrey, or possibly both cities) and reach Seattle and Portland. Preliminary concepts envision the potential for minor urban centers such as Bellingham, Everett, Tacoma, Olympia, and Longview to be served with stations as well. About 90% of the route would run within the borders of Washington State.

With speeds of 400 km/hr (250 mph), the travel time between Metro Vancouver and Seattle is estimated to be about one hour, including potential stops along the way in Bellingham and Everett.

Past preliminary studies on the high-speed rail project received funding support from the provincial government of British Columbia and the state governments of Washington and Oregon. BC and Oregon have yet to indicate they will supplement Washington State’s most recent efforts with funding of their own.

Amazon, another major corporate player in Seattle, also expressed its support for the state legislature’s decision in approving funding for high-speed rail planning and its overall transportation improvement strategy.

“Washington state legislators made history this year through strategic investments in our state’s transportation system that will help move the entire state forward. As Washington’s largest private employer and the operator of an expansive logistics network, we at Amazon are especially interested in the transportation system and have a long history of advocating for its maintenance and expansion,” said David Zapolsky, Amazon vice-president and general counsel, in a statement following the state legislature’s decision.

“We know that transportation investments help everyone, as Washington residents rely on transportation infrastructure to commute to work, deliver goods, and participate in economic activity.”

Other major components of Moving Ahead Washington include US$5.4 billion (CA$6.9 billion) for carbon reduction and multimodal expansion, US$3 billion (CA$3.8 billion) for public transit, including the implementation of free fares for ages 18 and younger, US$1.3 billion (US$1.7 billion) for active transportation, and US$836 million (CA$1.07 billion) to construct four new hybrid-electric ferry vessels.