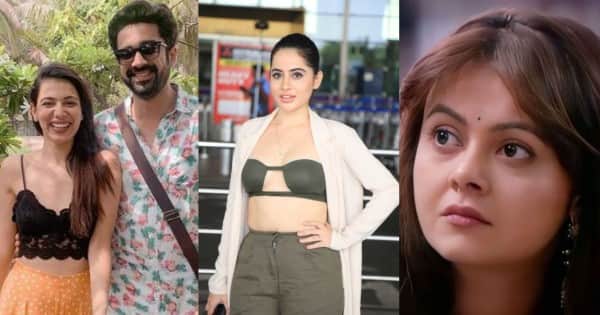 Television actors Palak Purswani and Avinash Sachdev were in a relationship for four years. Both had a roka ceremony in January 2021, but according to reports, both Palak and Avinash have left it. Confirming her break up with Avinash, the actress told ETimes that her self-respect and loyalty matter the most in a relationship. Also Read – From Alia Bhatt To Kiara Advani – A Look At Sidharth Malhotra’s Dating Life

Urfi Javed again targeted by trolls for his quirky outfit!

Bigg Boss OTT fame Urfi Javed was spotted at the airport in a risky outfit. She wore a cutout top with a bodysuit pattern done in net. Netizens once again trolled her for her revealing clothes.

In Bigg Boss 15, Prateek Sahajpal and Karan Kundrra got into a fight and they turned violent. Karan was heard calling Prateek’s mother a ‘stupid’ as he later called Tejashwi the same. Well, Karan’s statement did not go down well with many celebs including Kamya Punjabi, Bipasha Basu and Gauahar Khan. Kamya Punjabi tweeted, ‘Last weekend Salman sir told Karan that he is not taking a stand for his gf, here he is taking a stand like this, teri maa idiot… shi shi game toh boring thi Today the respect for them has also ended. Bipasha Basu wrote on Twitter, “Pathetic behavior of a grown man and woman! Calling names among family members is not okay, but it always happens. But one cannot call one’s mother a non-stop idiot, just to prove something ridiculous! Embarrassing! #BiggBoss15 #Shameful! Gauahar Khan also tweeted, “Pratik calls co-contestant stupid, Karan Kundrra, Prateik’s mother is not a contestant, watch your tongue! Shame on you for saying so many times. Your mother is stupid Wow Wow wow! Sadly Teja to defend it. The status of the mother is probably not known. well damn.”

In tonight’s Weekend Ka Vaar, some journalists will be seen gracing the stage. He will have an intensive interaction session with all the contestants. A journalist asked Abhijit Bichukale if he would not apologize for his mistakes. Abhijeet lost his cool and behaved badly in front of him. He said, “You even know what I am in the outside world”. Salman loses his cool and asks her to zip it.