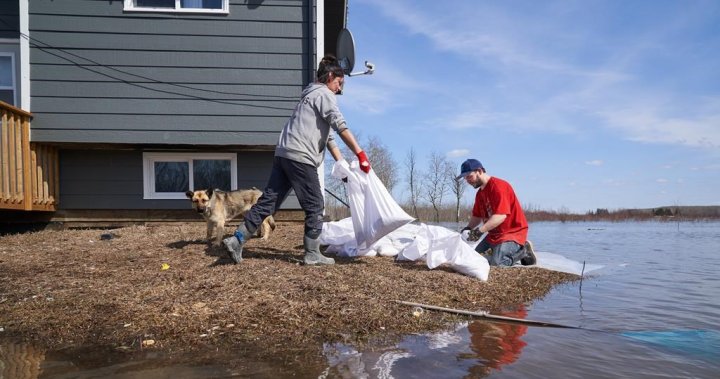 A Manitoba First Nation devastated by floods is evacuating more residents for 11 days in a flood battle to protect the community.

As of Tuesday, 1,900 people living in the Peguis First Nation have had to leave their homes, Chief Glenn Hudson said on Tuesday.

Hudson said that number made up more than 42 percent of residents directly affected by the natural disaster, which are now spread across Manitoba’s communities, including Gimli, Selkirk and Winnipeg.

He told Global News on Monday that more people may need to be evacuated given the forecast for rain.

Hudson met on Sunday with officials from the Provincial Emergency Measures Organization and provincial forecasters with Indigenous Services Canada (ISC).

“They are predicting that (the crest) will be a foot higher than the previous level, and we are gearing up for it in terms of building our sandbags, building our tiger dams… “

Hudson said he wasn’t feeling positive about the situation, also asserting that if the main road – Provincial Road 224 – breaks down again, the community can exit on an alternate route.

In a statement on Monday, the ISC said it was holding daily meetings with First Nation and provincial officials, ready to offer further support to residents in need.

The ISC has activated the Canadian Red Cross, which is providing housing, food, laundry and personal hygiene products, the spokesperson continued.

He said that the department is also bearing the cost of sand bags, water pumping and construction of temporary dykes.

While hundreds of people have left, Hudson said Tuesday that he is prioritizing the safety of those left behind.

“We have some sherps who are amphibious vehicles. We have pulled eight families out of their homes in those vehicles.”

Hudson said a MedVac helicopter — on standby 24 hours a day through Thursday — is the newest piece of equipment in his arsenal.

“Within the first hour, there was a 17-day-old who had to go outside,” he said.

Hundreds of volunteers along with First Nation Community Response Corporation are back in the community helping to fill sandbags to protect homes and infrastructure.

Hudson said he is also getting help from neighboring countries.

“We are in response mode right now,” he said on Monday, adding that the community will still need to address its long-term flooding strategy.

Hudson said Ottawa has yet to make any commitments to long-term safety.

“I know as First Nations people, however, we are better off not having flood protection in the long run.”

— With files from Brittany Greenslade

Flames Game 5. uses a 3-round third period for the top stars at 3-1

Michigan loses to Wisconsin after grim second half performance