‘We’re used to living next to Russia’: While foreign embassies evacuate, life in Kyiv carries on 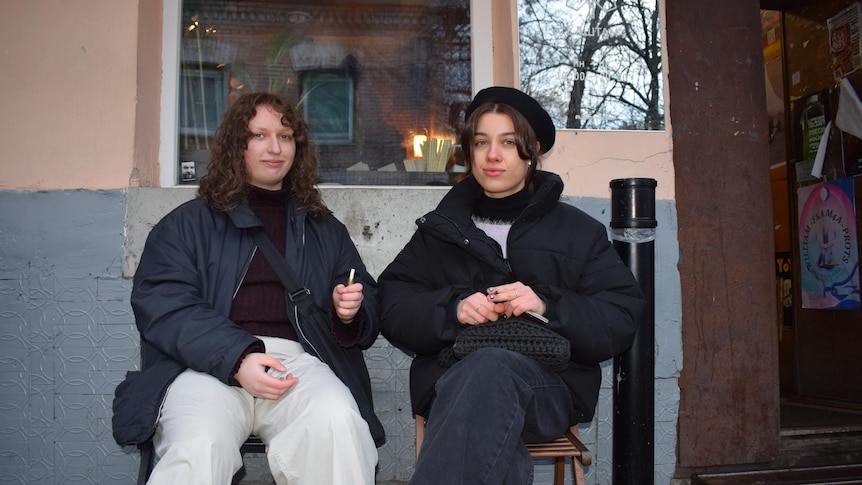 Foreign embassies in Ukraine have been hurriedly withdrawing their staff in recent days, amid warnings that further Russian invasion may be increasingly imminent.

The US, UK and Australia were among a number of governments urging their citizens to evacuate immediately after Washington stepped up its warnings on Friday.

While the news caused alarm among foreigners, life in Kyiv carried on as usual.

Inside a trendy coffee shop, the scene was lively but unremarkable. Cappuccino orders flowed in while a small group of well-dressed students took a smoke break outside in an open courtyard.

“Everything remains unclear, so everything is calm,” bar manager Nickolay Venediktov said.

“We’re used to living next to Russia.”

Russia has massed more than 120,000 troops along its borders with Ukraine, but tensions heightened even further last week after Russia started large-scale military drills in neighboring Belarus and sent ships to the Black Sea for “naval exercises”.

Moscow says it has no plans to attack. But Ukrainians are wary of promises made by Russia.

The general mood in Kyiv remains calm, but local woman Tatiana Marchenko says her anxiety has been growing.

“We’re just watching the news and waiting for what happens next and hoping for the best,” she said.

Others have been living with a deep-seated anxiety for eight years now.

“I’m from Donetsk and my parents remain there, so it’s strange for me that people are only now taking off their rose-coloured glasses and understanding that the war has been going on for eight years,” said Ilmira, who wanted to use only her first name.

“I can’t be any more of an anxious person than I am now, so for me nothing has changed.”

Ukrainians say they have ‘the fighting spirit’

On Saturday afternoon, thousands marched the streets in a show of resilience and unity against Russian aggression.

“We have a very healthy dose of patriotism, it’s our culture, it’s our language and we did have to struggle a lot to get here,” said Olga Vasylevska, who attended the march with her friends and sister.

“I brought my little sister here … to show her how many people are ready to unite and fight for what they believe in.

“We are concerned but we also have the fighting spirit.”

Among those marching were Erfan Kudusov and Marlen Kataky, Crimean Tatars who were forced to leave their homes after Russia occupied the Crimean peninsula in 2014.

“I left out of concerns for my children, for my family, because this imperial ideology could have taken away my children. Physically, they would have been with me but mentally Russia pressures with its propaganda,” Erfan Kudusov said.

He said he was ready to fight further Russian aggression.

“We’re not leaving here and we’re not letting the Russians seize Ukraine.”

A column of red and white — colors that became symbolic of anti-government protests in Belarus — marched alongside the sea of ​​patriotic signs and Ukrainian flags.

The 39-year-old said he was recently forced to flee the regime of Alexander Lukashenko with his family.

“We understand that Ukraine is in danger. We are also in danger. Our country is already occupied by Russian troops because they are conducting exercises … we worry about whether the troops will leave our territory.”

Amid fears of further Russian invasion, Australia announced on Sunday it would be evacuating its embassy in Kyiv and shifting operations to the western city of Lviv, near the Polish border.

But some, like Nate Robert from Perth, are planning to stay put.

“My feeling is that it is premature,” he told the ABC.

“There is nothing actually happening out of the ordinary, especially in Kyiv.

“Ukraine in general has been in a state of conflict for quite a few years now in the east.”

It’s a sentiment shared by many expats choosing to stay despite government calls to evacuate.

“I’m planning on staying but watching closely each day … and trying to muddled through what is real and what is political posting,” British national Daniel Beckwith said.

“Everything feels fine. The threat comes from media.”

Yet others were heading government advice and packing their bags. On expat groups, some were seeking out last-minute COVID tests and scrambling to find available flights to their home countries.

While Ukraine said it would be keeping its air space open, some airlines have already started reacting to what the US has warned is an increasing “imminent” threat.

Dutch carrier KLM suspended flights to Ukraine on Saturday amid the heightened risk. Two-thirds of the 298 people killed when Malaysia Airlines MH17 was shot down by a Russian missile over eastern Ukraine in 2014 were Dutch citizens.

Meanwhile, Ukrainian budget airline SkyUp said its flight from Portugal to Kyiv was diverted to land in Moldova after its Irish leasing company banned the aircraft from entering Ukrainian airspace.

Even if they wanted to, some Ukrainians have nowhere to flee

For Ukrainians however, the question of evacuating is a lot more complicated.

,[Should I] become a refugee, go to Europe, apply for asylum, for citizenship and what then? Our parents remain here, our friends, family, work,” Tatiana Marchenko said.

But she is now considering the possibility of working abroad in the future.

“There’s less of a desire to stay here,” she said.

“It’s our home country but my safety and my family’s safety plays a role.”