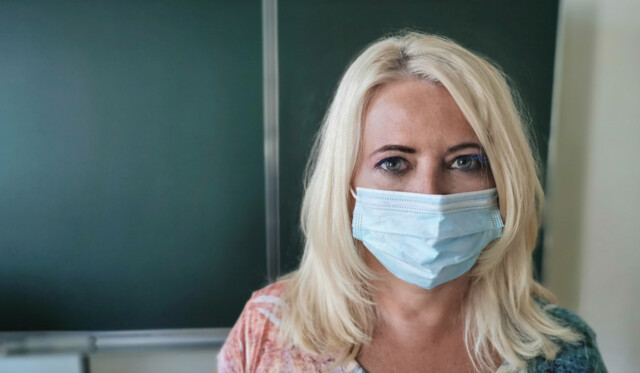 Primary and secondary schools in western Canada have reopened after the Christmas break as provincial governments have faced criticism from teachers for what they say lack protective measures against the COVID-19 omicron variant.

Schools in British Columbia and Alberta reopened on Monday, with health and education officials emphasizing the need for in-person learning. Schools in Saskatchewan returned as scheduled last week.

Leaders of teacher unions in Saskatchewan and British Columbia have been critical of how schools have been reopened and pressure on staff.

Patrick Mays, head of the Saskatchewan Teachers Federation, said, “We have had situations where learning assistants, or learning resource teachers, who are specialty teachers, are being taken out of their duties in classrooms to cover staff shortages. Is.” “When you make so many changes in schools it affects the learning schedule.”

The president of the BC Teachers Association concurred with those concerns. Teri Mooring said teachers want priority for N95 masks as well as booster vaccines in schools.

“We are concerned that there will be too many functional closures. It is difficult for us to understand why the additional security measures we are demanding are not being put in place,” Mooring said in an interview.

She said the schools’ refusal to accept the union’s requests could result in staff shortages.

“We think those safety measures make teachers and support staff more likely to stay healthy,” she said. “This whole issue of minimizing has always been a problem in education. We want to see a more preventive approach, rather than a minimalist approach.”

B.C. Education Minister Jennifer Whiteside said in an interview that teachers would not be prioritized for vaccines and that the government had taken steps to manage the risks posed by the virus.

“It’s a balancing act. One thing we’ve been very firm on in BC … is to make sure we put children and young people at the center of our decision-making. We know how much access it is to the individual. Learning is important,” said Jennifer Whiteside.

But Cameron Phillips, a parent and Vancouver secondary school teacher, said he questions whether the B.C. government is thinking about the long-term health impacts facing students.

Phillips said he and his wife, who is an elementary school teacher, decided this week to keep their children at home as they assess the COVID-19 situation in schools.

“As a parent, I am concerned about the future health of my children,” he said. “As a teacher, I love my children. I love my students. I know that the school where I teach has generations of families. I have a lot of students in my classes who do it.” Take away aunts or grandmothers to the house and cause pain or devastation in their families.”

Phillips said he was “baffled” by the reluctance to provide N95 masks to students and staff, and would like to see better ventilation in schools.

“One of the things we’ve seen is how important it is to maintain as much in-class learning as possible while acknowledging some high transmission, which is unique not only to the school, it’s health care, schools, all Happening in workplaces,” he said.

In Alberta, as the number of Omicron infections hit a record high this week, the president of the Alberta Teachers Association said he is concerned about the future of students in classrooms as “community spread resonates in schools.”

Jason Schilling said on Friday, “I think this year is going to be higher than what we’ve seen, but it can be accelerated, so we’ll see more absenteeism, we’re going to be more able to fill absent teachers in schools.” Will see incompetence.”

Alberta has left it to schools to contact trace infections.

The Calgary Board of Education also said the absentee rate for Kindergarten to Class 12 students was 20.2 percent on Wednesday.