What do you see in this picture? Your answer may be the solution to our problem of coexistence with wildlife 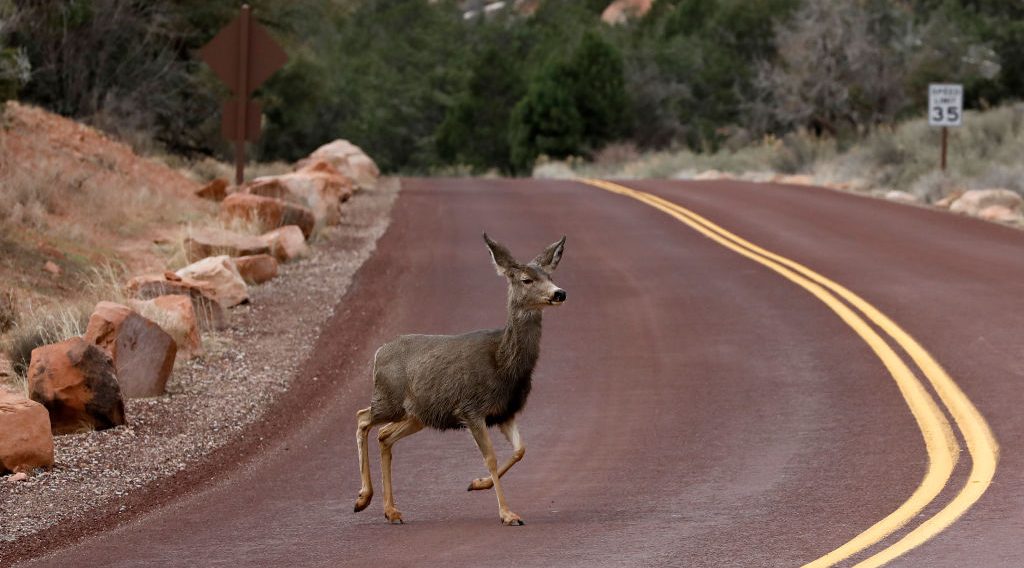 If you were asked what you see in this picture, your immediate answer would most likely be “a deer crossing a road”. However, there is another possible answer: “There is a road through a forest”.

This example “does a lot to explain what is happening to wildlife,” explained some time ago in an interview with CNN en Español María José Villanueva, coordinator of the WWF organization’s conservation cabinet for Latin America and the Caribbean. I went.

This is purely a matter of optics: if your focus is on human needs first and foremost, you will identify the deer as a disruptive element. However, if you’re able to zoom in, you’ll realize that we humans were the first to start the disturbance by building a road in the middle of these mammals’ habitat.

If you manage to analyze the places around you in this key – taking into account that less than 3% of the planet’s entire area remains ecologically intact, according to a study published in the journal Frontiers in Forests and Global Change You will be one step closer to solving our problem of coexistence with wildlife and, consequently, the biodiversity crisis that is ravaging our planet.

story of the jaguar who ate a dog

Habitat destruction is one of the main factors driving biodiversity loss. There are plenty of statistics to illustrate this problem: According to Living Planet, the population of vertebrate animals on the planet – a category that includes mammals, birds, amphibians, reptiles and fish – has declined by an average of 69%. Report 2022 published by WWF. In Latin America and the Caribbean, home to a large portion of so-called ‘megadiverse countries, the percentage has climbed to 94% in about 50 years.

The population of vertebrate animals on the planet has decreased by an average of 69% between 1970 and 2018. In Latin America and the Caribbean, the percentage has increased to 94% in about 50 years.

For those of us who live in built-up areas, it can be difficult to fully grasp the notion of “habitat loss”. However, in recent years, episodes have multiplied that make this loss tangible, close, and even a source of fear. All over the planet, we have seen how animals we normally only see in a nature reserve or zoo thrive on our human environments such as capybaras in Argentina, elephants in China and even jaguars in Mexico.

Villanueva gives the example of a colleague who bought a piece of land in Quintana Roo and there a jaguar, the king of cats – and the largest predator – in the Americas, ate his dog. What happened? Jaguars have less and less space to hunt. And they also have fewer prey, as they are hunted for human consumption. And dogs, slow and plentiful, are like a “delicacy” for these hungry cats.

Behind this, what happens is that jaguars have lost about 50% of their original habitat and “this has triggered processes in which they move to large areas to find a mate, to find food, they are now Can’t do that. “Because they already have a highway or they have a tourist complex (in the middle)”, says Villanueva.

(The conservation of jaguars, also known as jaguars, is important for ecosystems to remain healthy for two reasons, explains WWF: On the one hand, because they are the largest predator on the continent, they are responsible for populations of other animals.) control size. On the other hand, since they require a large portion of the area to grow, they are an “umbrella species”, that is, “a species that, if protected, preserves the habitat of hundreds of other species”. who share their home”)

According to WWF, soil changes and over-exploitation of flora and fauna are the main factors associated with biodiversity loss, as well as pollution and the presence of invasive alien species. And there’s another factor to take into account: climate change.

“Something that complicates the situation is that with climate change they are moving habitats very slowly, but the habitat and the various resources that the animals need are moving,” said Jeffrey Parish, general director of conservation, previously explained to CNN en Español. Oceans, land and water from the Nature Conservancy. So animals need to move to new places to get the resources they need to survive.

(Scientists defined that global warming must be limited to 1.5°C above pre-industrial levels to avoid the worst consequences of climate change, and according to a recent United Nations report, we are on course to limit warming between 2.1 and 2.9°C.) Celsius warming if the promises made by countries so far are taken into account – promises, that sometimes far exceed actual achievements.

A powerful example of the impact of environmental change was captured by photographer Dmitry Koch, winner of the 2022 Best Wildlife Photography Award, who used a low-noise drone to take this image of a polar bear on the tiny island of Koluchin in the Russian High did. The Arctic.

Dmitry Koch’s “The Bear House” depicts an eerie sight of fog-shrouded polar bears in a long-abandoned settlement on Kolyuchin Island in Russia.

Behind the beauty of the image’s composition and colors, lies a dramatic reality: human-induced climate change has reduced sea ice, making it more difficult for polar bears to hunt and search for food in unpredictable environments. have been forced to.

From “Humans vs. Nature” to “Humans in Nature”

Preventing habitat degradation is a fundamental part of planning for the conservation of biodiversity. “Land use change must stop,” Villanueva says, “and we must not continue expanding our urban march, which could be achieved with better planning.”

In addition to conserving habitats, Parish points out the need to work on corridors that allow species to move wherever they find it convenient.

“We have to establish corridors so that[species]can move safely. For example, these corridors could be a route connecting two habitat centers, like a highway that connects two cities”, he explains.

Villanueva points to this solution with an example: if we have two protected areas where tapirs live and an agricultural crop in between, we should work to have enough infrastructure so that tapirs can move from one area to another. Can go to the area.

In short, in Villanueva’s words, it is about a change in narrative that promotes a different way of acting: “We have to move beyond ‘human versus human’.” From ‘nature’ to ‘human within nature’ (…) the struggle to co-exist”.