What we know about Green Bay Packers QB’s NFL future 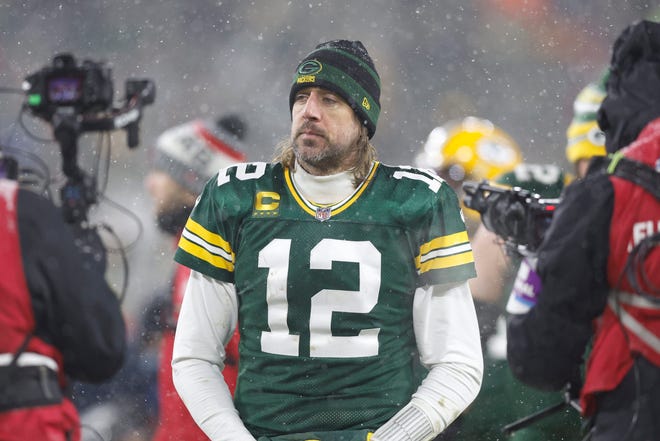 Aaron Rodgers stood alone in the backfield with 3:40 left on the clock. The NFC divisional round game between the San Francisco 49ers and Green Bay Packers was tied at 10. He took a seven-step drop with a clean pocket, as his offensive line handled the 49ers’ pass rush.

The reigning MVP, who has a strong case for a second straight award, flung the ball 46 yards down the field into double coverage, intended for his favorite target – receiver Davante Adams. Replays showed a wide-open Allen Lazard in the middle of the field.

The Packers would not get the ball back. The Niners drove for a game-winning field goal as time expired, and a season was cut short in Green Bay once again.

Now the question is whether that incompletion to Adams was his final pass as a Packer. And even further: was it the controversial quarterback’s last time playing football?

Before the season, Rodgers posted pictures on social media likening himself and Davante Adams to Michael Jordan and Scottie Pippen. Some surmised it was a reference to “The Last Dance” documentary, the Jordan-centric series that detailed the final season of the Chicago Bulls’ dynasty in the 1990s.

That season ended with a championship, and despite consistent playoff appearances, the Packers have not appeared in the Super Bowl since they defeated the Pittsburgh Steelers in 2011. Rodgers led a game-winning drive and was named MVP.

A non-committal Rodgers said on Dec. 29 that he would not rule out retirement after this playoff run. He also said a decision would be swift.

“It won’t be something that I drag out for months and months,” Rodgers said. “I’ll have conversations with my loved ones after the season, with (general manager) Brian (Gutekunst) and (CEO) Mark (Murphy) and (vice president) Russ (Ball) and the coaching staff, and then make a decision at some point.”

If Rodgers decides he wants to keep playing football, but that Green Bay is no longer a tenable situation, the Packers would have to trade him. He is under contract for the 2022 season, and he would make $26,470,588, according to Spotrac.

“I’m not going to hold the team back from anything, and once I commit — and if it’s committing to move forward here — it’ll be a quick decision.”

A factor in that decision, Rodgers said, will be health.

After testing positive for COVID-19 and missing a game in October, Rodgers suffered a fractured pinky toe that nagged him for the remainder of the season but gradually improved.

He broke his clavicle in 2013 and missed eight games and missed the final two games of 2017 after fracturing the same bone.

“I’ve given a lot of my life to this game,” Rodgers said on the “Pat McAfee Show” on Jan. 4. “I didn’t start playing until eighth grade and obviously played four years in high school, played three years in college, now in my 17th (in Green Bay). At some point, the ride stops and you got to get off . You want to, I think, still be able to play, still be able to walk, be able to have cognitive brain function when you’re done playing — those are important.”

Rodgers went 20-of-29 for 225 on Saturday. The Packers averaged 26.5 points per game this season, but managed 10 against the 49ers. It marked Rodgers’ fourth home playoff loss of his career.

Asked if the way this season ended could affect his thinking, Rodgers replied:

“Of course it does. But there’s obviously a lot of decisions to be made, there’s a lot of players whose futures are up in the air. Definitely will be interesting to see which way some of those decisions go. But I’ll have the conversation with Brian (Gutekunst) in the next week or so and get a little bit more clarity and think about my own future and how much longer I want to keep doing this.

“It’s tough to say at this point,” Rodgers said. “I don’t think it’s fair to anybody or myself to really go down those paths at this point. It’s disappointing, sad and fresh. I’ll have the conversations in the next week or so and start to contemplate after that.”

Rodgers’ salary cap number is $46 million, which the Packers front office will have to consider when planning offseason maneuvers.

On March 16, 15 players will become unrestricted free agents. Adams will likely receive a franchise tag, making the math even harder for a Rodgers extension. It’s possible, but it would render it unlikely the Packers could re-sign their cadre of free agents, a group that includes:

Rodgers perceived slights from Gutenkust, who didn’t offer him a new contract. He leaked his displeasure on draft night in April 2021, a year after the Packers used a first-round pick on another quarterback, Jordan Love, who is currently Rodgers’ backup.

The drama fueled a tumultuous offseason that ended with Rodgers’ compliant contract, notably with an out after this season. Rodgers and Gutekunst also appear to have mended the bridge, with Rodgers saying recently, via The Athletic:

“I’ve enjoyed being a part of conversations that directly affect my job, which I talked about in the offseason, and Brian’s taken the lead in that. And I do appreciate the way our relationship has grown.”

Where could Aaron Rodgers play next?

USA TODAY Sports’ Nate Davis laid out the case for eight teams to pursue Rodgers. Among the contenders for his services, should the quarterback declare he wants to continue away from Green Bay, are Cleveland, Denver, New England and Philadelphia.