Who can upgrade the Ravens’ offensive line? A Marshal Yanda fan, a scary-movie watcher and more. 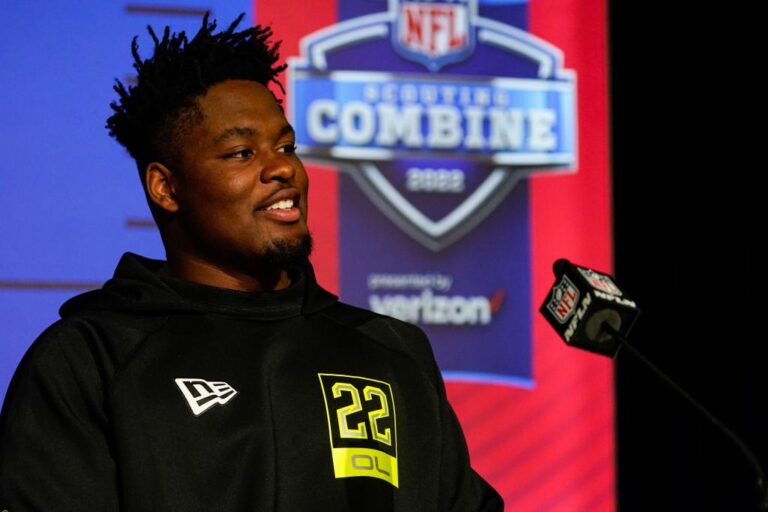 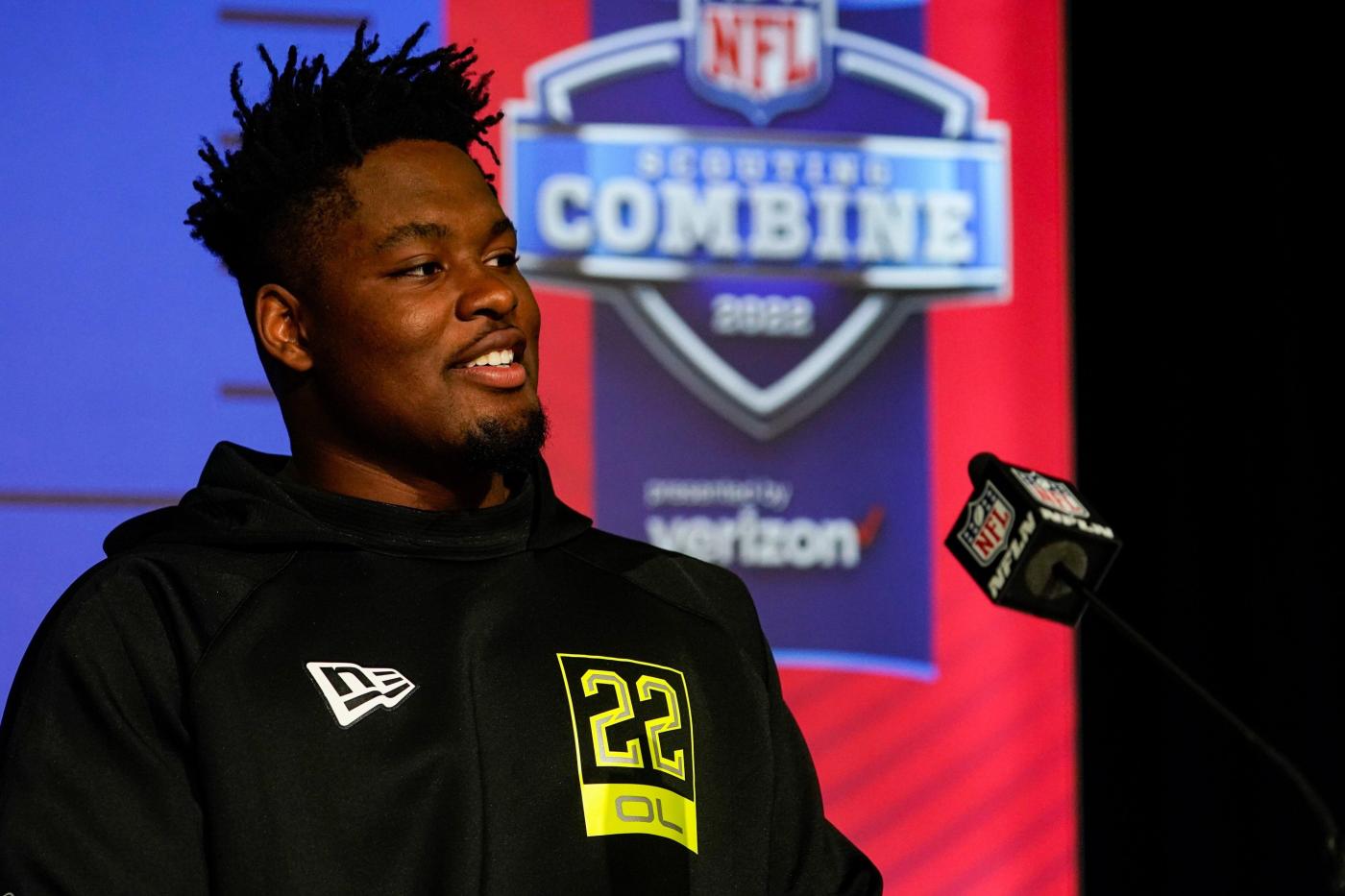 Most of the 58 offensive linemen here at the NFL scouting combine will have their wingspan measured, their blood work tested, their play recall questioned and their 40-yard-dash timed.

The most important criterion for the lineman-needy Ravens, team officials said this week in Indianapolis, is far simpler. And perhaps far harder to find.

“I just really want guys that can kick ass,” general manager Eric DeCosta told reporters Wednesday. “If the guy’s just a dominant player, he can move people off the ball, he can bend his knees, he can pass-protect, he can do all those different things, and he’s durable, then we’ll probably take the guy. “

“I want offensive linemen that block people, that impact the defense, that cut somebody out of the defense,” coach John Harbaugh told the team website, “Simple, right?”

Almost nothing about the Ravens’ offensive line picture is. Kevin Zeitler is expected to start at right guard. To his left and right, uncertainty reigns.

Will Ronnie Stanley, coming off his second straight season-ending ankle injury, be healthy enough for a 17-game season at left tackle? If Alejandro Villanueva, as expected, doesn’t return, who’d step in at right tackle? Where might the team turn if center Bradley Bozeman leaves in free agency? Will Tyre Phillips, Ben Cleveland or Ben Powers emerge as the clear-cut starter at left guard? And where does Patrick Mekari have the most value?

With the start of free agency less than two weeks away, the Ravens’ trip to Indianapolis will offer some clarity. Meetings with player agents and draft prospects should paint a clearer picture of who might be leaving, who might be coming and who might be worth drafting.

Given the Ravens’ salary cap constraints, rookies are more likely solutions up front than veterans. Under DeCosta, the Ravens have committed to building a “pipeline” for young, cheap offensive linemen through the draft. “No. 1, they get hurt, and No. 2, you need a bunch of them, and No. 3, you can’t keep everybody,” he said in 2020.

His approach, heavily reliant on middle-round picks, has had mixed results. In 2019, the Ravens took guard Ben Powers in the fourth round. A year later, they got tackle Tyre Phillips in the third and guard Ben Bredeson in the fourth. Last year, they took guard Ben Cleveland in the third. Bredeson was traded after a year. The three others will enter training camp fighting for one, maybe two, starting jobs.

After a disappointing 2021, the line will be a priority this offseason. Harbaugh said at his season-ending news conference in January that the Ravens “have to have a strong, commanding offensive line that can control people at the point of attack.” The group struggled at times to clear holes for quarterback Lamar Jackson and the team’s depleted running back room last season, and the Ravens finished No. 29 in the NFL in sacks allowed per pass attempt.

There are pressing needs across the roster, but with the No. 14 overall pick in April’s draft, they could find a premium prospect at tackle, guard or center. They could also trade down, acquire more draft capital and grab a lower-tier prospect. In what DeCosta called a “very, very strong” offensive line class, there’s no shortage of contenders.

The Ravens have drafted only one Iowa offensive lineman in their franchise history. Linderbaum knows him well. So does a generation of bullied defensive linemen: eight-time Pro Bowl guard Marshal Yanda.

“Marshal being an Iowa Hawkeye, the things he was able to do in the NFL, it’s awesome,” Linderbaum said Thursday. “You know, Marshal was a guy that always came back and worked out at Iowa. So when we were in there in the winter and the spring, he was the guy that would always come back. And just kind of seeing his work ethic and how he operated, there’s a reason why he was in the league for so long and why he was an All-Pro.”

The Ravens took Yanda in the third round of the 2007 draft, No. 86 overall. If they want Linderbaum, the consensus top center of this class, they probably can’t wait until Day 2. He’s been a popular first-round target of the Ravens in mock drafts, a potential plug-and-play replacement for Bozeman.

Still, his fit remains a question. Linderbaum, who won’t participate in the combine testing because of a mid-foot sprain he suffered in Iowa’s bowl game, acknowledged that he’s “undersized” for the position. (In college, he was listed at 6 feet 3 and 290 pounds.) His mobility would be an asset in a zone-blocking scheme, but his transition to a power-heavy system like the Ravens’ could be bumpy.

“I think I can compete in any system,” he said. “You know, whatever system I get in, I think I can help a team out. I don’t think I’m limited to what I can do. I’m confident in my performance and what I can do for teams, and whatever team thinks that I can help them out, I’m sure going to give it my all and compete my butt off.”

To understand how Penning wants to play, start with his night-before-the-game ritual.

One Halloween night in college, Penning was preparing for a game at Illinois State. He wanted to watch a scary movie. He’d never seen “Saw,” the 2004 horror classic in which one character is alive by candle and another has his head blown off by shotguns, so he found it on Netflix. “Kind of a fun movie to watch,” he said Thursday.

And so a tradition was born. Even Penning’s mother watched the movie series with him. If he wanted to play with an edge, why not stick to a genre where characters brandish sharpened weapons?

Which could work out just fine in Baltimore. NFL Network analyst Daniel Jeremiah said in a conference call last week that he wouldn’t expect Penning to make it past the Ravens at No. 14 overall. “When you watch him, this guy is just a Raven,” he said.

“Teams that want that kind of nasty edge, I mean, that’s a great team to be a part of,” Penning said when asked about the Ravens. “Teams that really like the physicality up front are definitely a great team.”

Penalties have been a problem for Penning, a three-year starter at left tackle, but he allowed just two sacks and six quarterback hits over his final two college seasons, according to Pro Football Focus. At Northern Iowa, he stood out as a run blocker in the Panthers’ downhill running game.

The polarizing highlights he produced at Senior Bowl practices — playing through the whistle, shoving defensive linemen to the ground, keeping his mean streak intact — said more than any scary movie ever could.

“You want to make the defender across from you feel it, really,” he said. “You want him at the end of the day to be exhausted and he wants to go home and get on that flight and get the hell out of there, pretty much.”

The biggest offensive tackle in the draft was a lot bigger a few years ago. The 6-8 Faalele, a potential first-round pick, said he weighed 426 pounds when he enrolled at Minnesota in 2018. These days, he’s down to 385.

“I wouldn’t mind seeing how 375 would feel by the time I get to my team,” Faalele said Thursday.

With his size, there aren’t a lot of players to look up to. Philadelphia Eagles standout Jordan Mailata, a fellow Australian and former rugby player who, like Faalele, fell into football in his teens, is one.

Orlando Brown Jr. is another. The former Ravens starter, a three-time Pro Bowl selection whom the Kansas City Chiefs are prepared to make one of the NFL’s highest-paid tackles, was just under 6-8 and 345 pounds when he weighed in at the 2018 combine.

It was tough to get past Faalele last season. He allowed just one pressure over the final eight games of his Golden Gophers career, according to PFF. But with NFL-level speed rushers likely to challenge him in the NFL, and stronger edge defenders not as susceptible to pancake blocks, Faalele said he’s focused on improving his pad level and expanding his range of pass sets.

“I feel like I definitely have a lot to show and I have room to grow,” he said. “I feel like that’s the exciting thing about me. I have a lot more potential to reach.”

Johnson, a Bowie native, grew up in an NFC East household, with his parents splitting their loyalties between the Dallas Cowboys and Washington Commanders.

So, naturally, he became a Pittsburgh Steelers fan.

“I didn’t really have a team,” Johnson, a potential late-first-round pick, said Thursday. “I have some family from the area, and as a kid, I remember seeing those ‘bumblebee’ jerseys. And I’m, like, 7, 8 years old. I’m thinking, ‘That’s cool. That’s sick.’ So I became a Steelers fan and just kept watching them just throughout the years.”

Johnson grew up idolizing Steelers star center Maurkice Pouncey, but his own NFL career didn’t seem possible until a few years ago. Growing up, he was a competitive golfer. He wanted to go to Harvard. As a senior at Riverdale Baptist, he weighed about 225 pounds.

Instead, the 6-2 Johnson landed at FCS school Davidson, where he bulked up and started 19 games over his first two years. He transferred to Boston College, stood out at both tackle and guard over three seasons, and earned an invitation to the Senior Bowl. He dominated there, too. Now Johnson’s playing weight is up to about 315 or 320 pounds. His stock has never been higher, either.