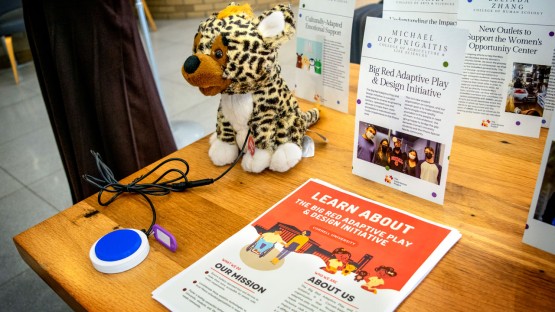 The Contribution Project’s student showcase on May 5 in Human Ecology Commons recognized nearly 100 contributions made by Cornell undergraduates, each receiving $400 to implement their ideas, ranging from improving medical care in India to the disabled. This included making toys more accessible to the public.

“It’s really amazing to see the range of opportunities our students want to contribute to,” said Anthony Burrows, leader of the Contribution Project and director of the Bronfenbrenner Center for Translational Research (BCTR). “They are seeing needs on campus, in their neighborhood and around the world. The funding may have a small impact, it may be large, but these students are looking at things in their world and how they become a part of it. can.”

In February, students were encouraged to apply and explain how they would contribute to the world if they were given $400. Students whose ideas were selected were notified in early March. Nearly every Cornell graduate college and school student had a project selected.

Michael Dikpinigitis ’24, a biological science major in the College of Agriculture and Life Sciences (CALS), focuses on access for his contributions to the Big Red Adaptive Play and Design Initiative, which takes battery-powered toys and devices and transforms them into Makes it easy to use for persons with motor impairment. For example, students replaced a battery-powered teddy bear with a large button so that kids could activate it with their heads instead of their fingers. He said the funding will help the new student organization adapt more toys that are important to child development for use by physically challenged children.

“These toys allow them to learn and play, perhaps for the first time in their lives,” Dikpinigitis said. “They’re also really important for learning more, and also learning how to use buttons, which is an important skill for independent communication with assistive communication tools later in life.”

The event allowed Decpinigitis to meet another contributor, Adele Williams ’24, a communications chief at CALS, who will use the funds to support podcast production group State of the Pod. Its eponymous podcast covers emerging issues in science, technology, and society, and will soon have decpinigitis as a guest.

Wynne Williams-Ceci ’24 in the College of Arts and Sciences used her funds to rent rehearsal space for her all-female cappella group, After Eight. The group didn’t have the budget to rent proper rehearsal space and relied on free classroom space and an iPhone tuning app in lieu of pianos. The funding was a morale booster for his group, but he also highlighted the issue of disparity between male and female musical performance groups.

“Male music groups on campus receive a large amount of alumni donations,” Williams-Cessie said. “Every year, all-female groups receive almost nothing due to the simple fact that men in our society earn more than women and everyone wants to give back to the group they once belonged to.”

Other contributions this year include projects supporting medical work in rural and tribal India, helping high school students prepare college applications, giving people money to lift their mood, and older adults in Ithaca. Including and interacting with food to Hawaii, and addressing food insecurity on campus. All selected project contributions are listed on the project website.

“I love how this project makes me love this campus when you learn about what people are doing outside of the classroom in addition to what they are doing,” said Burrows, who lives in the Ferris Family. He is also an Associate Professor. Course Studies in the Department of Psychology. “When we asked, ‘What would you contribute?’ It’s a really, really remarkable glimpse of what it looks like to do the greatest good.”