With frustration mounting as losses add up, Mountaineers seek to sweep Cyclones 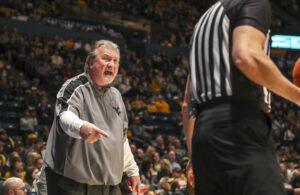 West Virginia’s only win over the last six weeks came February 8 when the Mountaineers put together one of their better performances this season to defeat Iowa State, 79-63.

WVU entered that game with seven straight losses, and this time around in Wednesday’s rematch at Hilton Coliseum, the Mountaineers come in having lost four consecutive contests.

Iowa State is the only Big 12 team West Virginia has the opportunity to beat in both regular season meetings, and if the Mountaineers are to do so in the 7 pm affair airing on ESPNU, they’ll need to earn their first conference road win in this their eighth try.

“I’m getting tired of losing,” said WVU guard Taz Sherman, the team’s leading scorer at 18.7 points per game. “It’s really difficult for me to do this. I just don’t like losing. We need to play better.”

WVU’s latest setback, making it 11 in 12 games, came Monday when the Mountaineers could muster only 25 second-half points and were out-rebounded by 18 in a 77-67 defeat at TCU.

The Mountaineers (14-13, 3-11) are 1-8 on the road this season. They’ve been outscored by an average of 11 points in those nine road games, including 13.7 points in the seven league games away from home.

“I would say fight over the hump, but losing 11 out of 12 games like that, that’s not a hump. That means it’s something wrong and we have to fix it right now. It’s never too little, too late. We still have games left and the Big 12 Tournament left, so it’s a lot of basketball to be played.”

Sherman led West Virginia with 23 points in Monday’s loss to the Horned Frogs and eclipsed 1,000 points for his WVU career, becoming the 55th player in program history to do so. Sherman remains the conference’s second-leading scorer behind Kansas’ Ochai Agbaji.

Guard Sean McNeil saw his scoring average dip to 12.7 points after missing all five of his field-goal attempts in a scoreless showing at TCU.

“Everybody has off games. He just has to get back into the rhythm of things,” Sherman said. “Knowing Sean, he’s going to figure it out. He’s a vet and an older guy and he’s going to buckle down and realize we need him on this team.”

The Mountaineers shot a respectable 45.6 percent at TCU, though they made only 9-of-26 shots after halftime after shooting 17 for 31 through 20 minutes.

Swingman Jalen Bridges shows a 9.1 scoring average, while 6-10 forward Isaiah Cottrell has two of his three highest-scoring outputs this season over his last three games, scoring 13 in a loss at Kansas State and nine against TCU.

Point guards Kedrian Johnson and Malik Curry continue to play important roles for the Mountaineers, while key reserve Gabe Osabuohien has no field goals and one point over the team’s last five games, one of which he didn’t play in.

As WVU’s downward spiral has continued, Huggins has said a shakeup to the team’s rotation could be in store, perhaps one that offers more playing time to the team’s four freshmen: Guards Seth Wilson and Kobe Johnson, wing Jamel King and forward James Okonkwo.

“As a player, I didn’t appreciate playing with guys who didn’t care,” Huggins said. “I never tolerated having guys around that didn’t care. Sometimes, there is tremendous good in addition by subtraction. You don’t want to do that. You try to give everybody a fair shot and a fair break. Sometimes it has to come down to let’s do this like they do in the real world.”

Iowa State (18-9, 5-9) is enjoying quite a turnaround in TJ Otzelberger’s first season as head coach. One year after the Cyclones finished 2-22, lost all 19 games against Big 12 teams and dropped 18 straight to end the season, ISU in line to make the NCAA Tournament with another win or two.

ISU has responded well since its loss in Morgantown. After falling to Kansas State at home in overtime to go to 3-9 in league play, the Cyclones have won at TCU and soundly defeated Oklahoma 75-54 last Saturday. Although the Sooners shot nearly 49 percent, they had 16 turnovers and struggled mightily to stop the Cyclones, who made an astounding 18-of-24 shots in the opening half and shot 33 of 49 (67 percent) for the game.

In his first season with the Cyclones, 6-foot-4 guard Iziah Brockington, who previously played at St. Bonaventure and Penn State, has proven to be on the better players in all of the Big 12. Brockington 17.3 points on nearly 48 percent shooting and easily leads ISU with 7.5 rebounds on average.

Brockington enters off a 22-point performance on 10-of-13 shooting, though he was held in check in the first matchup with the Mountaineers and finished with 11 points on 4-of-12 shooting.

Six-foot guard Tirese Hunter is the Cyclones’ only other double-figure scorer on average at 11 points. Hunter scored a team-high 22 in the matchup in Morgantown, while Caleb Grill, who’s fourth with an average of 6.5 points, scored 12 in that contest on four 3-pointers.

Gabe Kalscheur, a 6-4 guard, is the team’s third-leading scorer at 9.4 points, but was scoreless on 0-of-5 shooting in the earlier meeting with WVU.

Although West Virginia held a 37-28 rebounding advantage over ISU in the earlier meeting, the Mountaineers have been out-rebounded by 35 over their last two games and easily have the worst rebounding margin of any Big 12 team at minus-4.4 per game.

“We’re going to watch some film tonight,” Huggins said following the loss at TCU. “It’s hard to say that wasn’t me when you’re up there on the film. We don’t block out.”

Huma Abedin steps out, brings her memoir to Abu Dhabi

Artists Biennale. flock to dakar for