With Verstappen and Leclerc suspended, Carlos Sainz favorite for pole position in Belgium 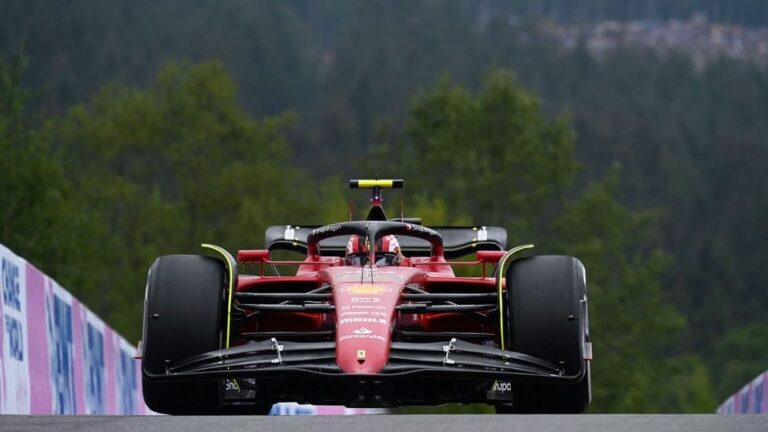 With the first two of the World Championships, Max Verstappen (Red Bull) and Charles Leclerc (Ferrari), suspended to the starting grid on Sunday, Carlos Sainz Jr (Ferrari) is emerging as the favorites for ‘pole position’. The Belgian Grand Prix after Friday’s rehearsals.

In his absence, Spain’s Carlos Sainz starts as the favorite with his fast Ferrari. Although they also changed parts, in their case the gearbox, they did so within the permitted limits.

First under light rain and later heavy rain, Sainz set the best time of the first free practice session on the legendary Spa-Francorchamps circuit, before the second session at the end of the afternoon dominated by Verstappen was set for the 5th time. .

Lewis Hamilton, who is aiming for his first win in 2022 like his Mercedes teammate George Russell, can still hold hope after penalties on Verstappen (eight wins from 13 races) and his pursuer (3 wins) .

This rainy Friday reminded spectators of the deluge of the Belgian version of the race in 2021, when Verstappen won a Grand Prix traveling only two laps behind a safety car.

According to the forecast, the weather will improve on Saturday and Sunday for the qualifying session and race, so last year’s situation should not be repeated.

Thus, more than rain, it is the penalty that will fall on the grid due to multiple changes of the elements of the engine or gearbox.

In addition to Verstappen and Leclerc, Lando Norris (McLaren), Esteban Ocon (Alpine), Valtteri Bottas (Alfa Romeo) and Mick Schumacher (Haas) were also suspended. Their starting order is yet to be known, which will be determined by their result in the qualifying session (14:00 GMT on Saturday).

Friday’s session was marked at the top by a long-awaited announcement: Audi’s arrival as an engine supplier in F1 in 2026.

The four-ring brand will be associated with an F1 team “to be announced by the end of the year”, according to CEO Marcus Duesmann, who was present for a press conference in Belgium.

This alliance can be sealed with Sauber: the Swiss-based team currently competes as Alfa Romeo. But the Italian brand announced this Friday that the deal would expire after the 2023 season.

The way is now clear for the Audi-Sauber alliance. As for the arrival, another Volkswagen Group brand: Porsche is also expected in 2026. The partnership with Red Bull is expected to be announced in the coming weeks.

Another current aspect pertains to the expected permanence of the Belgian Grand Prix on the calendar this weekend. Unlike the French GP, which will be off the calendar next year, Spa could be renewed for 2023.

Guillermo Barros Scheloto this Friday announced the squad list of the Paraguayan squad for the friendly against Mexico scheduled for next Wednesday in Atlanta, United States.

A great innovation is the return of America de Mexico defender Bruno Valdez, who will once again wear the Paraguayan team shirt after almost three years.

The last time Bruno Valdez played a match against Albiroza was on November 19, 2019, when the Paraguayan team, under the technical guidance of Eduardo Berrizo, drew a goalless draw against Saudi Arabia in their last friendly of that year.

From that game to the following August 31, the date of the friendly against Mexico, 1,019 days would have elapsed for Bruno Valdez’s official return to La Albiroja.

The defender, who originated from Sol de América, has 17 official matches with the Paraguayan team and a total of 30 matches if friendly matches are added. Also, he has a goal, which he scored in 2017 against Ecuador at Defenadores del Chaco, which La Albiroza won 2-1.

Due to debts from former coach Daniel Rachley, the Adrian Jara Stadium of the General Diaz club had to be auctioned off and is now a new owner.

Finally, the one who was awarded the property is the representative of the Olympia club, Julio Jiménez, According to information from Nación Media journalist Juan Coronel. The professional did this on behalf of a third party, not the covered entity.

The final cost of the stadium at auction reached 25,100 million guaranies, which at current exchange rates would be approximately $3.6 million. The base value of the property was set at 920,880,090 million guaranies.

The club’s fans and the residents of General Diaz had performed a few days before to avoid the auction, but in the end they were unable to do so, so the club in the city of Lucano, which had been in the First Division until a few seasons ago, is now new. Must be looking for property.

The auction could not stop and a new place of 12 km would have to be found… @universo970py, https://t.co/TPEGreOJgr