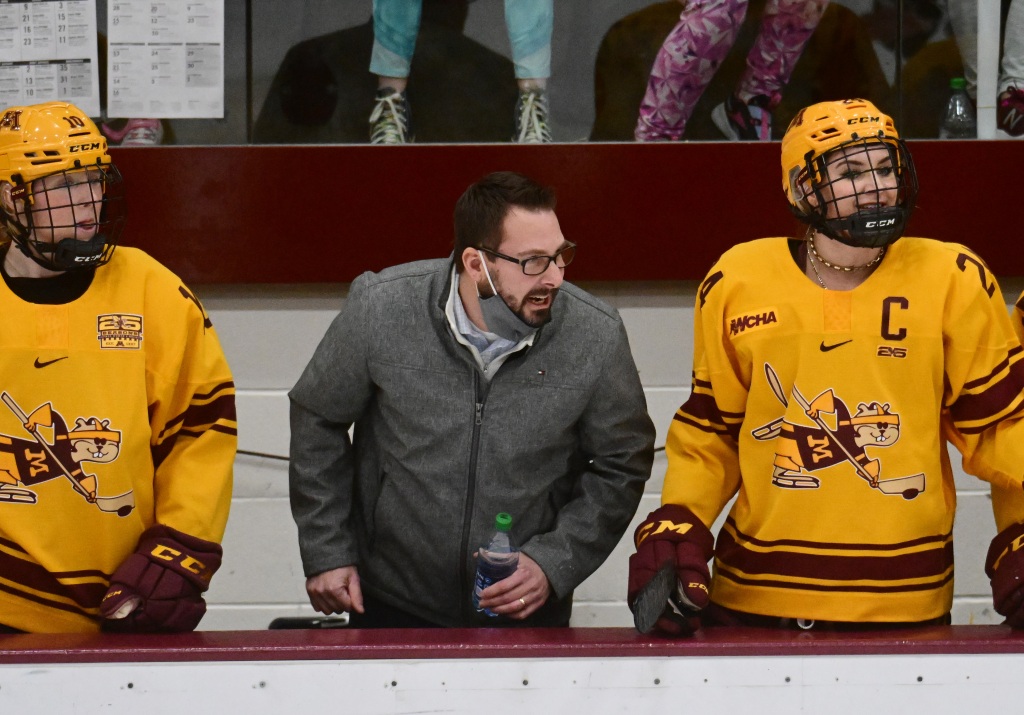 For years, the WCHA has dominated women’s college hockey, and within that elite coterie, it’s been a three-team race for the top between Minnesota, Minnesota Duluth and Wisconsin.

The top two teams in the PairWise rankings meet this weekend, and No. 1 is Ohio State. The Buckeyes will play host to No. 2 Minnesota with a 5 pm puck drop on Friday and at 2 pm on Saturday.

Minnesota, UMD and Wisconsin won a combined 17 national titles in 21 years — only Clarkson has broken the WCHA’s hold — but Ohio State has forced its way into that club. The Buckeyes (18-4-0) lead the WCHA with a .796 winning percentage and 112 goals. In the Gophers’ first series this season, Ohio State swept Minnesota (19-6-1) at Ridder Arena.

Nadine Muzerall has woken the giant.

Since becoming the Buckeyes’ head coach in 2016-17, the former Minnesota player and assistant coach has taken the Buckeyes to the Frozen Four twice in four seasons — the 2020 tournament was canceled by the coronavirus pandemic — and her team won the WCHA Final Faceoff in 2019-20.

Muzerall has done it with players from all over North America, and a few from Europe. Currently, there is only one Ohio player on the roster, junior blue liner Lauren Bernard — and she is a transfer from Clarkson.

“We talk as a staff about how we have to present everywhere, show that logo on the jacket everywhere,” Muzerall said. “We don’t have that natural loyalty that they have in Boston with (Boston College) and Northeastern. And at Minnesota, I always said, it was more like we were selecting kids rather than recruiting them.

“We have to recruit harder and expand that search to the west coast and Canada,” she said. The Buckeyes’ closest natural talent hotbed is Toronto, a 5½-hour drive. That’s where Muzerall found Sophie Jaques, a blue liner who leads the Buckeyes with 34 points.

In Ohio, Muzerall said, there is an appetite for hockey but not many ice sheets. Minnesota has rebounded from an off year with big help from a large, strong freshman class almost exclusively from the Twin Cities (Ella Huber is from suburban Chicago). The Buckeyes reloaded with the help of eight transfers from programs such as Bemidji State, Clarkson, Wisconsin and Robert Morris.

That’s one reason the Gophers are eager to play this series; they feel they’re a much different team than the one that lost to the Buckeyes 4-2 and 4-1 in October.

“I know me along with the other freshmen were pretty nervous,” forward Peyton Hemp, who leads Minnesota’s freshmen with nine goals and 25 points, said of that first series. “I remember during some time off ice, me and Ella Huber actually talked about being nervous. … It was obviously super nerve-wracking.”

Hemp scored her first goal in the opener to give Minnesota a 1-0 lead and has since become a key part of the team’s resurgence from an 11-8-1 COVID season.

“Now it’s the good butterflies,” she said. “You’re not super nervous. We’ve been around. Even though we’re freshmen, we’ve played a high number of games. We kind of know the drill and it’s more (a feeling of) excitement now.”

Frost and his players insist this weekend is more about how they play than about Ohio State. If the Gophers play well, they believe, they’ll win – just like they did in a rare sweep of then-No. 1 Wisconsin last weekend. Muzerall doesn’t subscribe to that way of thinking, even though she might have the WCHA’s most aggressive team, as indicated by the Buckeyes’ league-leading, plus-78 scoring margin.

“Look at what happened with Mankato,” she said, referring to the Mavericks’ 5-4 overtime victory at Minnesota on Jan. 15. “I think the second you do that, that’s when you get slapped in the mouth. Our focus is on Friday but for us, I would never look at it that way.

“We have our philosophy and our game plan. We’re fierce, we’re fast, we’re fit. But we do plan for our opponent and prepare for the habits they may have.”