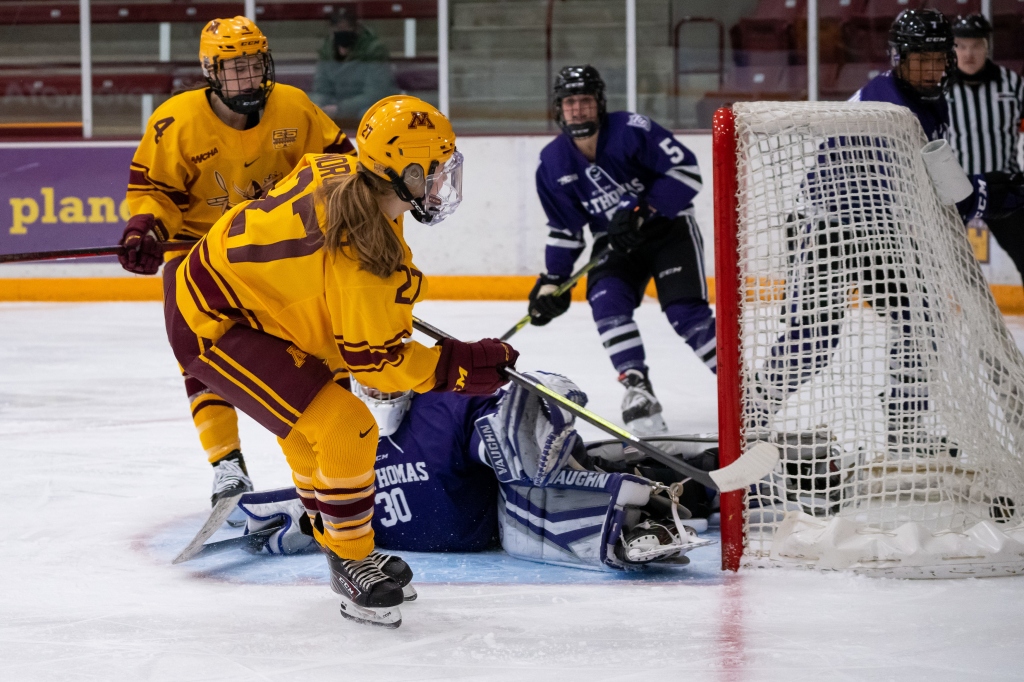 Minnesota women’s hockey is close to setting up a red carpet of sorts to the Frozen Four. The WCHA postseason final is already set for Ridder Arena, and if the Gophers take care of business, a first-round NCAA tournament game on home ice, as well.

“I think we’ve put ourselves in a really good position for the end of the year, but we’re still in the midst of trying to win a conference championship, so that’s pretty exciting,” he said. “We haven’t put ourselves in that position over the last few years.”

The top-ranked Gophers (24-7-1) haven’t won a WCHA regular-season title since the 2018-19 season, and with a five-point lead in the standings heading into their regular-season finale against St. Thomas (3-21-1) this week, they can clinch their ninth outright conference championship by sweeping the Tommies.

Also No. 1 in the PairWise standings and Ratings Percentage Index used to help seed and compose the NCAA tournament — expanded to 11 teams for the first time this season — the Gophers are in line to host a regional, and earn a first-round bye, when the tournament begins March 12.

“Yeah, that’s something I definitely think about, having those end goals in mind,” said Gophers wing Peyton Hemp, a freshman from Andover. “But I feel like I, and everybody else on this team, just really tries to focus game by game. You don’t want to get too far ahead of yourself.”

Read Also:  The resilience of the Nets makes them contenders against the odds

The Gophers won the first two meetings against St. Thomas, which is making the jump from Division III to Division I this season, by a combined score of 16-2. The series opener is Thursday at St. Thomas Ice Arena, the second game on Saturday at Ridder.

If Minnesota wins both games, the teams will meet again in the WHCA playoffs as the top and bottom seeds. The three-game series is set for Feb. 25-27 at Ridder.

A rare Thursday game isnt great timing for either team because the women’s hockey Olympic gold-medal game is scheduled for 11:10 pm local time on Wednesday.

“It’s so late that we’re going to give (players) the option to do a little watch party or watch it on your own at your place,” Frost said. “We’ll see.”

There are eight players with Gophers ties on Team USA, including forwards Emily Zumwinkle and Abbey Murphy, who are expected to rejoin the team in 2022.

“I think we’re still going to get together as a team and have a little viewing party.” Hemp said.

The Gophers’ three-goalie rotation has narrowed considerably down the stretch, with sixth-year senior Lauren Bench getting the majority of starts in the net.

“I think once we get into the playoffs here we’re probably going to have to make some decisions, but Bench is somebody that’s been playing really well,” Frost said.

Freshman Skylar Vetter of Lakeville, who has allowed just 11 goals in 17 appearances, hasn’t started since a 7-2 victory over Minnesota State on Jan. 13. Makayla Pahl, a junior who lowered her goals-against average to 1.70 in a 5-1 victory against St. Cloud State last weekend, has made just three starts since Jan. 21.

“She’s played every weekend here in the second half, she’s a sixth-year senior and she’s got some great experience,” Frost said. “We’ll make that call when we need to, but I’ve been happy with the way she’s been playing.”

Center Taylor Heise still leads the nation in scoring (23–32–55), two points ahead of Wisconsin’s Daryl Watts (25–28–53). … The Gophers got all but one first-place vote in the uscho.com poll, the other going to Ohio State.

US Vet Jailed In Iran Sues For $1 Billion, Alleges Torture