Wooden Bridges: Great design, they are a magnet for tourism and emphasize natural and sustainable beauty 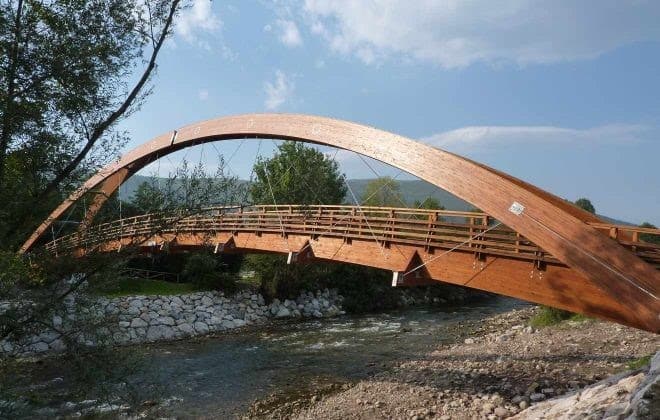 Whether they were made with ancestral techniques, in such a way that they are hundreds of years old and still exist today. Or, with the most advanced trends in construction with Laminated Timber (BoLT – Bridges of Laminated Timber) – a technology that ensures a useful life of 100 years – wooden bridges and walkways around the world exhibit a unique, inspiring charm and almost magical. But, in addition, the new actions of the world’s most important countries have chosen to build wooden bridges to reduce carbon emissions by 2030, taking advantage of the sustainable benefits of wood for this type of road works .

Europe, especially in the Nordic countries, as well as in the Netherlands and Belgium. in Japan and China. The United States and Canada are added, they are some of the countries where wooden bridges and walkways are already all the rage. For example, a recent study by the Canadian Wood Council estimated that there are currently approximately 50,000 wooden highway bridges in service in the United States and Canada, representing approximately 7% of all highway bridges. There are over 100,000 wooden railway bridges in North America. Many of these routes are ancestral, with ancient designs and construction techniques. Other, newer ones, are mostly developed under the model of laminated wood.

Bridges built in this way are executed with mechanically formed laminated timber beams and fastened with steel dowels. This method provides a more durable construction than glue lamination. Laminated beams can be produced in a flat shape or with a pronounced arc. Undoubtedly, paradigms change and, in a world that desperately needs to activate new ways to mitigate #ClimateChange, wooden bridges can be a great solution. In fact, the road construction sector (roads, highways, bridges and tunnels) generates high emissions due to the large use of non-renewable materials. The challenge is to change those paradigms and it becomes pertinent to explore new ideas and more sustainable alternatives. This is where wood plays a fundamental role.

The use of wood as an alternative to non-renewable and energy-intensive products is an important contribution to promoting supply chains that reduce the carbon footprint and contribute to achieving the carbon neutrality necessary to avoid climate catastrophe and As well as, at the same time, to a circular bio-economy that contributes to the objectives of sustainable development. To do this, public policies are needed to improve information and incentives to preserve forests, plant trees and deepen the use of wood as an alternative to products with greater climate and environmental impact. and the commitment of companies and individuals to engage in this necessary action for the climate.

Wood has the potential to store CO2 not only in its concrete use (construction, furniture, flooring, etc.), but also to replace products of fossil origin (fuels, plastics, chemicals) and non-renewable and high energy consumption (cement). Also provides options for , mineral). On the other hand, for its final disposal, it is renewable and reusable. These features not only help mitigate climate change throughout the production chain, but also lead to a circular bio-economy, and with it, to more sustainable and inclusive alternatives, given higher job creation, growth and Contributes to economic development.

Due to its lightweight nature, a bridge’s superstructure can be replaced with wood while the substructure is preserved. The most important question regarding the use of wood in bridges relates to permanent contact with water. In this sense, protecting the wood from direct contact with water is important to avoid fungal attack and consequent deterioration.

Ventilation is also important for wood. Must be able to dry after a wet period. It should also be inspectable to watch for any degradation.

It’s also important to mention that wood doesn’t degrade with road de-icing salts like concrete and steel do. And, structures built with BoLT systems provide for demountability so that bridges can be easily widened or reused in the future. This is the overriding idea of ​​the circular economy, designing a structure for growth, rather than making outright bets.

In addition, it is now common for bridges to break down after less than 50 years of use to meet changing functional requirements. For a replacement bridge, emissions-intensive concrete and steel would be produced. And while it may have a longer lifespan, it also means the emission of large amounts of CO2 into the atmosphere. In contrast, wood construction is climate positive.

“Wood is certainly a direct alternative to concrete and steel and projects and works in which it is the main construction material are increasing in all latitudes of the world. The preference, passion and even That romance has to do with its many competitive advantages: it is a renewable resource, it contributes to mitigating climate change, thanks to the absorption and fixation of atmospheric CO2 inside it, which affects global warming. significantly reduces emissions. The whole manufacturing process is faster and has less impact on the environment. It behaves well in acoustic conditioning of a building, absorbs electromagnetic radiation from electronic equipment and regulates indoor humidity In addition, it provides a naturally warm environment for both living and working,” explains architect Diego García Pezano, head of the architecture department of CADAMDA – La Camara de la Madera.

10 examples to find in the world

With amazing views of the semi-desert landscape of Cabo San Lucas on the Baja California peninsula, it holds the title of being the longest wooden bridge in the world., Here, in addition to various adventures on the sea and in the desert, there is one of the longest wooden suspension bridges in the world., In which not only pedestrians pass, but also 4X4s, all-terrain vehicles and quadricycles. It provides a passageway of more than 330 meters in length and supports a weight of 600 tonnes (about 300 people and 50 all-terrain vehicles put together).

In the Belgian province of Limburg, there is a tourist cycling network called “Cycling through the Heathland”. This magnificent bridge is made of pillars and interlocking wooden beams, just like its walls, in which local pine wood was used. It was carried out by the architecture studio Maat-Ontwerpers and Bart Lens, who thought up this cycle path located in the Hoge Kempen National Park for the tourism organization Visit Limburg. It is four kilometers long and includes a 300-metre-long wooden bridge, which offers panoramic views of the surrounding heathland and pine forests. 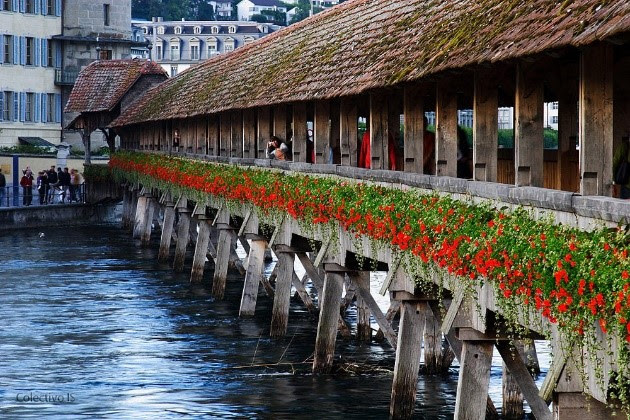 undoubtedly one of Most famous and oldest bridge in Europa, It is the oldest covered bridge in the continent and dates back to the 14th century., The 204-metre-long bridge connects the Old Town to the New Town and allows only pedestrian traffic. This wooden footbridge that crosses the river Reis surprises its visitors with their Flores and murals.

Located at the foot of the Yokohama Mountains and along the Nishiki River in the city of Iwakuni (Japan), is perhaps the most beautiful example of wooden walkway projects in the world. Declared a National Treasure in 1922, it is made up of a series of five wooden arches on wooden pillars in the channel where the dry bed of the river ends and begins. Between pillars and pillars, each section is 35.1 meters long, except for the two ends which span 175 meters with a width of 5 metres.

The Bridges of Madison County

It is impossible to forget them and get excited. The undisputed heroes of the Madison County Bridge, one of the most famous films in cinema, were originally 19, of whom only six now survive. They were all built between 1870–1884 and were roofed to protect the floor beams as they were too expensive to replace. Today they are national treasures protected by law in the United States given their historical consideration.

It is a magnificent wooden suspension bridge built over the Traversinertobel abyss. Between the mountains, trees and sky that frame the Swiss Alps, the bridge connects to a path that continues along a gorge until reaching the Traversina Steg footbridge, which covers another gap at the second most distant point of the itinerary. There is a replica to save.

The Kicking Horse Pedestrian Bridge is the longest freestanding timber frame bridge in Canada. Built in 2001 using locally obtained timber and featuring a Swiss design that reflects Golden’s Swiss Guides heritage, the bridge spans the Kicking Horse River in the city of Golden. Cyclists and walkers crisscross, and in summer rafts pass below on the last leg of their exciting whitewater rafting trip.

The largest wooden walkway in Europe, set on the banks of the Guadalhores River, becomes the main attraction of the Senda Littoral. The 270-metre-long and three-metre-wide structure is located next to the Guadalhores Mouth Natural Area, and the Málaga Provincial Council and the capital city council co-financed 50% of the total amount of the action, estimated at 1.6 million euros. ,

Built in 1909, the original Bridge of Dreams was part of the Kettle Valley Railroad. When the area was no longer a railroad crossing, the bridge was demolished in 1989. The route is now a multi-use trail on the Trans Canada Trail, the world’s longest network of recreational trails connecting Canada from coast to coast. The new “Bridge of Dreams” replaces the original bridge out of service. It is a recreational pedestrian bridge that crosses the Tulameen River frequented by local pedestrians and visitors.

The heritage of the original bridge has been preserved, reflecting the forests of the area; The replacement bridge incorporates existing concrete rail piers and newly constructed timber components in its design. The two bridge deck panels were precast off-site and transported to site for final assembly. The bridge was built on the site in one morning. The bridge deck has glued timber (glulam) arches and timber decking. Steel rods connect the deck panels to the glulam arches. The bridge deck is made of a corrugated steel deck and purlins of solid sawn timber. The exposed wooden bridge is a natural complement to the surrounding outdoor environment.

In China, a majestic structure

This 25-metre-long wooden bridge on the Gulou Waterfront – designed by Chinese architecture studio LUO Studio – is located in an artificial landscape created by a network of waterways and ponds, around the mouth of the Pearl River in Jiangmen, Guangdong, south has gone. China.

The studio designed a pedestrian bridge in the center of the area which is currently classified as an ecotourism complex. Hundreds of wooden elements were used, with a special focus on traditional and rural construction techniques used in the region, where wood is abundant and is the protagonist.