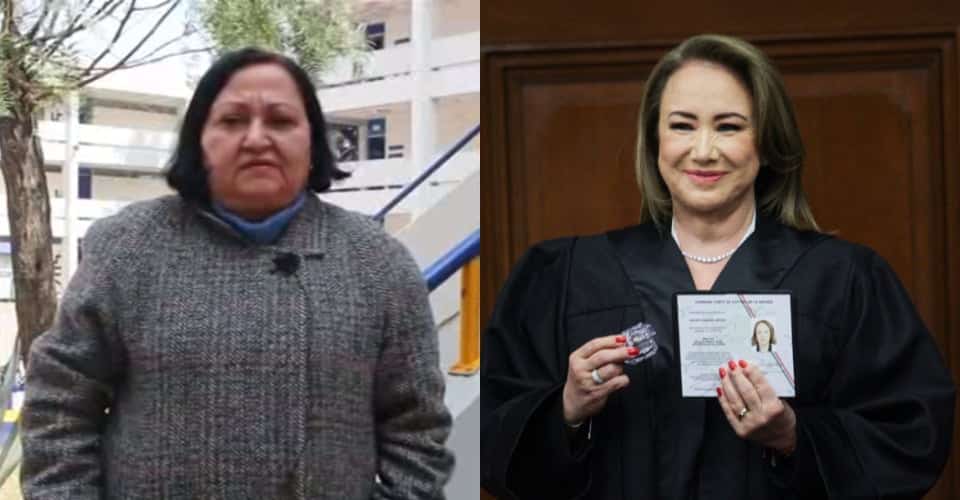 Other than this thesis plagiarism Minister Yasmin Esquivel, his advisor, Martha Rodriguez, The UNAM professor and who made his former student public, directed eight other works that also present similar elements and with which eight students graduated between 1986 and 2008.

in review by political animal of 507 thesis advised by Martha Rodriguez registered in lets goAt least eight of them have nearly identical titles, indexes, introductions and conclusions and, in some cases, identical acknowledgements.

These are the thesis: “Employment stability and the economic crisis”, presented by Carlos Arturo Loranca Olguín in 1985 and “Labor stability in times of crisis” by María Elena Gallguera González, published the following year. In 1987 the “rules of internal work” presented by Guadalupe Zarate Morales and a decade later, Blanca Barragán Robles graduated with a thesis with the same title.

“Prisoner’s work” was the thesis of Olivia Maulon Pérez in 1991, but in 1993, Maribel Briseno Miranda submitted the thesis “The work of those sentenced in prison.” While Sagário Reyes Kimball presented the thesis “Analysis of Dismissal Notices” in 2007, and the following year, Rigoberto García Carvajal graduated with a thesis with the same title.

In all cases, the constant – apart from the practically identical texts – is that he has had the same advisor: Martha Rodríguez, the same one who directed the minister’s thesis. yasmin esquivel And UNAM acknowledged on 31 December that it was plagiarism.

political animal requested an interview with Rodriguez to explain why he advised these same principles FES Aragon There was no response to either request when asked whether they had previous complaints regarding these actions and whether they would also investigate new cases.

Martha Rodríguez, moreover, was the first to sign a letter of support for Esquivel, when investigator Guillermo Sheridan found that the minister’s thesis “The ineffectiveness of unions in reliable workers of article 123 section A”, published in 1987, was a Plagiarism. Thesis “Ineffectiveness of union of reliable workers of constitutional article 123 clause ‘a'” submitted by Ulises Baez Gutierrez in 1986.

The report of Latinus is completely false. What else are they going to invent now? pic.twitter.com/so37Vz2a92

In his letter of 21 December, Rodríguez explained that the Faculty of Law and the FES Aragón supported Esquivel throughout his 45-year career as a teacher of various subjects at UNAM.

“During that entire time I have advised more than 500 degree theses, I have been director of the Seminar on Labor Law, Social Security and Agrarian Law of the FES Aragon, as well as advisor to the Seminar on Labor Law and Social Security. Faculty of Law, for which I certify that the thesis of my student Yasmin Esquivel is an original thesis that I directed and is its author”, he said.

According to that curriculum, to cover the advising of 507 thesis over his 45-year career, this would mean that Rodriguez would have to guide 11 theses a year, in addition to completing the rest of his academic and extracurricular activities.

Rodríguez also presented before a notary public an alleged statement by Ulises Baez Gutierrez, the author of the thesis presented to the minister a year earlier and in which he described himself as a plagiarist, according to what Esquivel had published. was recognized. a letter This 31 December in which he listed alleged evidence to defend the authorship of his thesis.

“The other student’s statement before a notary public, whose testimony was presented by the thesis director (Martha Rodríguez), I consider in my favor, because he recognized and explicitly stated that: ‘From that work I made many references and ‘ and ‘I was able to take several important parts of his work from 1985 to 1986’; given these facts, it is confirmed that the original authorship of the work is mine. The second student acknowledged that he Took thesis project which I started developing in 1985 and was under the authority of thesis director.

However, Baez Gutierrez assured the newspaper Central axis that he has not been called to testify and that, contrary to what Esquivel published, he is not considered a plagiarist but is recognized as a writer, because “argument dispels everything: what was first given the title, he clearly has the original text”.

The Academic and Scientific Integrity Committee of the Faculty of Higher Studies (FES) of Aragon is investigating the case of plagiarism of Esquivel, graduate minister of the said school and who aspires to the presidency of the Supreme Court of the Nation, and whose vote this Monday, Will be on 2 January.

To defend himself, Esquivel also claimed to present alleged evidence such as “three expert opinions on computer science” indicating that his thesis had previously been uploaded to the TESIUNAM catalog.

But UNAM responded that “academic review of the contents of both theses, their publication dates, as well as the university’s physical and digital archives, lead us to believe that the original thesis was supported in 1986,” says the rector’s statement. Signed by Enrique Graue.

In view of the alleged evidence presented at the last minute by Esquivel, UNAM will continue to review the case. “Given these conflicting facts and without being certain of the extent of the plagiarism expressed in the testimony of the former student of the 1986 thesis, it is clear that it is necessary to gather additional information to deepen the documentary analysis and, if applicable, Yes, call for the parties involved.

The thesis “Employment stability and the economic crisis”, written in 1985 by Carlos Arturo Loranca Olguín, then a student at the Faculty of Law, is similar to the one published by María Elena Gallaguera González, a student at the Escuela de Estudios Superiores Aragón. , , with the title “Labour Stability in a Time of Crisis”, was published the following year.

In this case, the only difference is between the text, as the original thesis has 122 pages, while the second has 166. Both cases: Martha Rodriguez.

“I appreciate the advice and patience of LIC. Martha Rodríguez Ortiz, who contributed to making this work a reality.”

This would be the first thesis to recommend the alleged plagiarism by Rodríguez since the 1987 case of Minister Esquivel, whose original thesis dates from 1986.

Another allegedly stolen thesis was “Internal Regulation of Work”, published in 1987 by Guadalupe Zarate at the then Aragon National School of Professional Studies. And a decade later, the same thesis was presented by Blanca Barragan Robles as part of the Labor Law and Social Security Seminar at the UNAM Law School.

In this case, the index only contains similarities between subjects, and in the introduction the seminary student of the Faculty of Law used a different term, but the same references that the ENEP Aragón student had written a decade earlier. While in the original he wrote: “Therefore on the basis of the collection of data and personal experiences we attempt to demonstrate the existing gaps in the law with regard to this issue, to be corrected in order to put an end to the great abuses that perpetrate them.” Could.” against the rights of workers”.

Appears in the second thesis: “Therefore on the basis of information and personal experiences we try to highlight the existing gaps in the law regarding this issue, in order to correct them in order to eliminate the gross abuses of Mexican workers. class rights”.

However, there are similar paragraphs within the thesis and similar parts in the conclusion.

In 1991, Olivia Maulon Pérez published her thesis “The Work of the Prisoner”, but in 1993, Maribel Briseno Miranda graduated from the Faculty of Law with the thesis “The Work of Penitentiaries”. In this case, the order of topics in the index and some words in the introduction are changed. While in the body of the thesis topic, the paragraphs are almost similar and some of the conclusion paragraphs are also similar.

The most recent thesis with obvious similarities is “Analysis of the Dismissal Notice”, published in 2007 by Sagrario Reyes Kimball, a student of the Faculty of Law, and another thesis with the same name a year later by Rigoberto Germán García Carvajal. was presented. FES Aragon.

The second text adds a few words to the introduction and differs in presentation in the table of contents, but also contains similar paragraphs in content. In the original thesis, the student includes as part of his thesis the corrections he considers necessary in relation to the notice of dismissal. In the second thesis, the student includes this at the end as their “proposal” for improvements. While the conclusions are practically the same.