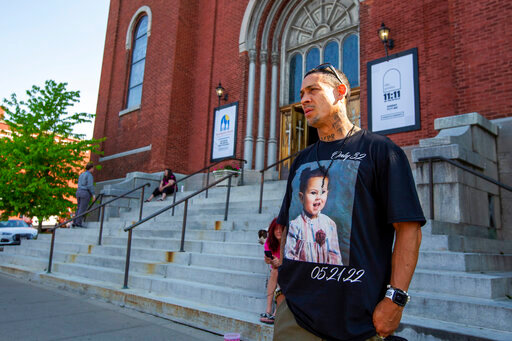 SYRACUSE, NY ( Associated Press) — Roberta Drury, a 32-year-old woman who was the youngest of the 10 Black people killed at a Buffalo supermarket, was remembered at her funeral Saturday for her love for family and friends, tenacity “and most of all, that smile that could light up a room.”

“Robbie,” as she was called, grew up in the Syracuse area and moved to Buffalo a decade ago to help tend to her brother in his fight against leukemia. She was shot to death May 14 on a trip to buy groceries at the Tops Friendly Market targeted by the white gunman.

“There are no words to fully express the depth and breadth of this tragedy,” Friar Nicholas Spano, parochial vicar of Assumption Church in Syracuse, said during the service. The stately brick church is not far from where Drury grew up in Cicero.

“Last Saturday, May 14, our corner of the world was changed forever,” he said. “Lives ended. Dreams shattered and our state was plunged into mourning.”

Drury’s family wrote in her obituary that she “couldn’t walk a few steps without meeting a new friend.”

“Robbie always made a big deal about someone when she saw them, always making sure they felt noticed and loved,” her sister, Amanda, told The Associated Press by text before the service.

The family asked that donations be made to the Buffalo Zoo, a place the sisters enjoyed walking through, Amanda Drury said.

“She was that light that shone through whatever darkness might have been present,” Spano said. He said mourners would remember Drury’s “kindness … love for family and friends, her perseverance, her tenacity, and most of all, that smile that could light up a room.”

Drury is the second shooting victim to be eulogized.

A private service was held Friday for Heyward Patterson, the beloved deacon at a church near the supermarket. More funerals were scheduled throughout the coming week.

Tops was encouraging people to join its stores in a moment of silence to honor the shooting victims Saturday at 2:30 pm, the approximate time of the attack a week earlier. Buffalo Mayor Byron Brown also called for 123 seconds of silence from 2:28 pm to 2:31 pm, followed by the ringing of church bells 13 times throughout the city to honor the 10 people killed and three wounded.

A candlelight vigil was planned at the Buffalo supermarket in the evening.